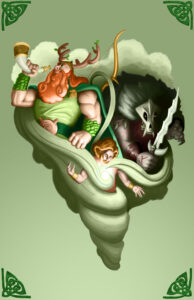 Arawn is a King of Annwfn, the Welsh version of the mythological Otherworld (also called Annwn or Annuvin). He’s a bit of a slippery figure – his personality, motivations, and magical abilities tend to shift depending on who’s telling the story. He’s made appearances in all sorts of media ranging from Old Welsh poetry to LARP guidebooks.

We first hear about Arawn in the First Branch of The Mabinogian.  Pwyll, hero of the First Branch, goes out hunting and makes the mistake of driving a pack of mysterious white dogs away from a killed stag, allowing his own dogs to feast on the stag instead. Arawn appears, rather put out, explaining that the white dogs were his dogs and that Pywll owes him compensation for stealing the spoils of Arawn’s hunt. Because this is The Mabinogian, where people like to make weird suggestions, Arawn offers to magically swap bodies with Pwyll so that the latter can slay Hafgan, Arawn’s rival king of Annwfn, in combat.

Pwyll agrees to switch bodies, poses as King of Annwfn for a year, and ultimately kills Hafgan. During the intervening year he refuses the sexual advances of Arawn’s beautiful wife (who, of course, thinks he’s her husband Arawn). When Arawn realizes that Pwyll slept chastely with his wife for so long, he becomes Pwyll’s lifelong friend.

After Arawn and Pwyll re-swap their bodies, Arawn’s wife — who remains unnamed — notices a change in his bedtime behavior following a year of no sex without explanation. Arawn admits to his wife that a stranger has inhabited his body for a year. His wife gives the following reply to this explanation for why her husband has refused to sleep with her or speak to her in bed for the past twelve months:

“I confess to God…you struck a firm bargain for your friend to have fought off the temptations of the flesh and kept his word to you.”

And that’s the only reply The Mabinogion gives her. Yep, that’s it.

So is Arawn basically a mythical trickster, or even a faerie-like king of the Otherworld? Again, that depends on who’s asking, and who’s conquering what country. Arawn’s character changes over time as often as depictions of his Otherworld realm, Annwfn. The Welsh word for “Otherworld” is sometimes translated as “Underworld,” but Annwfn doesn’t always line up with a more traditional Land of the Dead. The Welsh Otherworld, especially as it appears in The Mabinogian, is an ever-shifting and mythical parallel realm where heroes undergo magical trials and/or learn lessons before returning to the world that we know.

Once Rome conquered what is now Wales, the Otherworld of legend started to become conflated with a more Roman idea of the Underworld; in these cases, Arawn takes on a role closer to Pluto, ruler of the dead’s souls in the Roman Underworld. In the era after Christianity came to Wales, Annwfn started to look more like Hell. Annwfn and its king have a way of morphing to fit the narrative needs and morality of each story in which they appear.

By the time Lloyd Alexander reimagined Arawn as Arawn Death-Lord, the shapeshifting villain for his popular children’s fantasy series The Chronicles of Prydain (later adapted into the movie The Black Cauldron), Arawn’s character had come a long way from the magical but mostly friendly Otherworld king who just wanted his hounds to enjoy their well-earned stag.

Last Boat from Annwfn by Kristin Hall plays with the difference between various interpretations of Arawn’s character and examines the effects of his Mabinogion body swap on Arawn and his wife. Finding themselves on the misty shore of a Welsh lake after suffering a horrible accident in their American hometown, Adam and his wife Mina await a visit from Arawn himself. They examine their troubled marriage, which echoes Arawn’s own. But do they wait in the Land of the Dead, or have they simply sojourned to the Otherworld? And what future do they have together in this new land?

ARAWN by Kristin Hall
Directed by Lana Palmer
Staged Reading on November 13, 2019 at The EXIT Theatre

Kristin Hall is an actor, singer, playwright, and songwriter thrilled to be joining the Olympians Festival for the first time this year. A North Carolina native, she has written plays during her long arc westward for audiences in North Carolina, Georgia, Texas, and now California. She wrote her first play for a playwriting contest in sixth grade and has never looked back. (No really, she’s never looked back at that first play. But she’s pretty sure that her parents have a copy in a box in their garage somewhere.) Since moving to California she has performed with Broadway by the Bay, Silicon Valley Shakespeare, Berkeley Playhouse, PianoFight, and Palo Alto Players, among others. During daylight hours, she works at the Intel Museum in Santa Clara and freelance writes grants and communications material for nonprofits. She fell in love with Wales after visiting in 2018 and would gladly move there if doing so was at all feasible. For now, she lives in San Jose with her husband Bill and their tiny dog Fiona, who believes herself to be a terrifying hound worthy of a Welsh myth.

The image of Arawn was created by Feras Khagani.