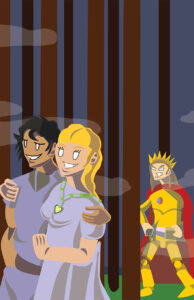 Sir Thomas Malory’s Le Mort D’Arthur, (1469-70) a collection of tales and adventures of England’s most well-known mythical hero: King Arthur, was one of the first works to widely popularize a noble, fictitious, chivalric past. The story of Arthur, and the Knights of the Round Table, and the Quest for the Holy Grail, are perhaps more popular and encoded in modern culture and literature than any other mythical figure. But, was there really a real King Arthur? Did he really build Camelot, marry a Queen named Guinevere, befriend an unbeatable knight named Lancelot, and go questing for the Holy Grail?

Medieval Britain was a violent and war-torn place, with endless invasions, broken alliances, and greedy warlords. The history of Britain has more in common with George R. R. Martin’s Song of Fire and Ice series (there really was a wall in the North to keep the ‘wildlings’ out) than an ancient and refined European civilization. By the beginning of the 5th century, Rome had given up and withdrawn from the island, leaving Britain a self-governed, chaotic land. Without the Roman legions to defend them, the Britons found themselves under constant attack from invaders from all sides. Picts attacked from the north (present day Scotland), Scots attacked from the west (present day Northern Ireland), and Anglo-Saxons invaded from northern Germany, across the sea. If anyone ever needed a champion, it was Britain.

And they found such a leader in a Romanized Briton (one raised in the Roman occupation, and, no doubt, having some mixed heritage), named Artorius, or Arthur, in its British form, who led the Britons to victory against the unending tide of invaders. Arthur made such an impression on the Britons of the late 5th century — and their enemies — that he became a totem of strength, resource, and bravery, his deeds almost god-like. Although he may never have pulled a sword from a stone, or create a Round Table, though military prowess, he created something far more lasting: a legend.

Lancelot du Lac first appeared as a principal character in the poem The Knight of the Cart, by Chrétien de Troyes, a French poet of the 12th Century, who was known for writing on Arthurian legends. Lancelot was known as the greatest of King Arthur’s companions, the lord of Joyous Gard, and the greatest swordsman and jouster of the age, and perhaps, the ultimate prettyboy. He was unimpeachable, at least until his adulterous affair with Queen Guinevere is discovered, causing a civil war exploited by Mordred (Arthur’s illegitimate son) which brings about the end of Arthur’s kingdom.

Lancelot grows up in awe of the story of King Arthur and his code of chivalry, and when he is of age, journeys to England to become a Knight of the Round Table.  During his journey to Camelot, he meets Arthur in disguise. Arthur decides to test Lancelot and belittles the stories of Camelot and the Round Table. Naturally, this angers Lancelot, who challenges Arthur to a joust, easily defeating him, unaware that he has unhorsed his childhood idol. Arthur reveals himself and the two become fast friends, journeying together to Camelot.

Almost immediately upon his arrival, Lancelot falls in love with Queen Guinevere, and one of their first adventures together is saving her from abduction by Maleagant, an enemy of Arthur’s (who also debuted in de Troye’s poem). The timing of events following their growing affection varies from source to source. For example, in Malory’s Le Morte d’Arthur, the adulterous relationship is not consummated for many years, after Lancelot returns from the Quest for the Holy Grail.

Guinevere, the wife and queen of Arthur, first appeared in British cleric Geoffrey of Monmouth’s pseudo-historical chronicle The History of the Kings of Britain, written around 1136, and continued to be a key figure in retellings of the Arthurian legend. In the Welsh Triads (medieval manuscripts preserving fragments of Welsh folklore and mythology) there were as many as three different Guineveres. If you add up all the times that Guinevere was kidnapped, wandered off, run off with someone (usually not Lancelot), or otherwise had any number of wild adventures, sometimes all in the same retelling of the legend, it does seem far too active a life for any one woman. In some versions she is childless, has one son, or has twin sons. Sometimes she is buried with Arthur, or is killed by Arthur after running off with Melwas, gets married (willing or no) to Mordred, becomes a nun, or dies of a broken heart. Perhaps only Guinevere herself knows the truth.

The tragic love triangle of Guinevere, Lancelot, and Arthur also first appeared in de Troyes’s The Knight of the Cart, and became a major motif in retelling of the Arthurian legends in the 13thCentury and beyond. The most famous telling of it is Malory’s Le Mort d’Arthur. In that tale, Guinevere is a moral compass for Arthur’s kingdom, directing his knights in the code of chivalry, teaching love over vengeance. She falls in love with Lancelot upon his arrival in Camelot, and throughout the story he dedicates his noble and chivalric deeds to her. Eventually, their not-so secret affair is exposed by Arthur’s half-sister Morgan le Fay, and proven by Mordred and his half-brother Agravain. Arthur is forced to banish Lancelot and reluctantly commits Guinevere to be burned at the stake. Knowing that Lancelot will try to stop the execution, the king sends many of his knights to defend the pyre, but Gawain, Arthur’s nephew, refuses. Lancelot arrives to save the queen and in the battle many of the knights are killed, including Gawain’s brothers Gaheris and Gareth, causing Gawain to vow revenge. Arthur declares war on Lancelot allowing Mordred the opportunity to seize the throne.

Brian Allan Hobbs invites audiences to hear this legend again, but this time directly from the participants. Only Arthur, Lancelot, and Guinevere know what really happened to draw them together and then force them apart, how a secret love forged the greatest kingdom in England, and how revealing that love destroyed it. As we listen to each of their stories, hopefully we may find the truth somewhere in between.

His writing includes The Many Women of Troy (Musical Café, Hollywood Fringe, Capital Fringe), Hamlet Sings (Prospect Theatre), As You Like It (Hilberry Repertory), Twelfth Night (UCLA), and The Tempest (Vital Theatre Company). Brian’s songs and orchestrations have been performed both locally and at many benefit concerts and shows in New York and London.

The image of Arthur, Lancelot, and Guinevere was created by Rogernald “Rusty” Jackson.