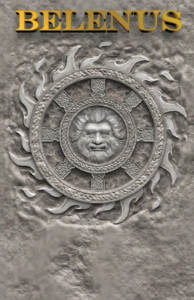 The Celtic deity, Belenus, has come to be associated with gods of various other religions, that while similar, the associations are every bit as contested if not more than they are confirmed. In fact, Belenus had so many associations throughout the ages that he virtually lost his own story and identity in the assimilation.

What is known and largely agreed upon is the god’s function amongst his believers as a protector, a guide and a bringer of light. He would ride a horse across the horizon carrying with him fire and the sun. It was in his name that the Belentine ceremony was performed in which all the herds and people would pass between two mounds of fire to be made pure and protected against the spirits and spiritual elements before they go out to pasture at the start of the spring season when the ferries and nymphs are freed to roam.

The real story of Belenus is about more than the information that is known, it’s about what is unknown; about how much of his original narrative has either been co-opted and assimilated to other cultures or lost altogether, rather than preserved. Celtic tales of the deity were largely oral tradition, eventually to be replaced by the written word then by conquests from every subsequent civilization. The tragedy begs some very poignant questions; who gets to decide which belief systems is valid, what happens to ours as it evolves after and beyond us, and whose voice gets to be identified or erased in the process? Perhaps most importantly, as we contend with spiritual gentrifications, the question must be posed, who owns and maintains the rights to a culture’s beliefs as they expand or contract or die and resurrect

On crafting a work for “Belenus,” Jason writes:

“What struck me about this god is how so many of the questions that come when searching its origins mirrors the ones that come up during this tenuous debate over immigration and how our government is handling what it sees as the problem. In the past months I have been particularly moved by the people attempting to make the journey to the border, by their stories and struggles and fears, by the families that have been ripped apart and the children whom we as a country have label other than – other enough at least to place in human cages. I’ve also been struck by the fears of people who are or claim to be US citizens, many of whom descend from family who were immigrants at other times in our nations history and face similar xenophobia. At some point it just begins to feel as though we are all of us immigrants fighting each other, arguing over who has the right to be here, to be heard, to be human; and we are being played by those who would rather us fight each other than realize who we should really be pointing the fingers at.”

“La Boca” is a hip hop musical exploring the complexities of immigration, patriotism and humanity through the lense of immigrants at various stages of citizenship.

When her family is separated at the border, Bella, a teenage immigrant, is forced to weigh the consequences of outright resistance against her vow to find her young sister whatever the cost. It’s a path that leads her to the heart of a conflict, in a community at odds with itself. Divided by perception, fear and the struggle to be seen and heard, and set to the musics of revolution, Bella must find her own voice and her sister before they both are found out.

BELENUS or LA BOCA by JASON MENDEZ
Directed by Sara Judge
Staged Reading on November 6, 2019 at the EXIT Theatre

Jason Mendez is a content creator and storyteller. Jason knows the power of voice, striving to challenge and complicate social narratives by making space for un- and -underrepresented experiences. His works range from stage plays and short films to graphic novels. Jason holds a Master of Fine Arts degree in Playwriting from San Francisco State University. This will be his fourth time writing for the Olympians Festival.

The image of Belenus was created by Nathan Anderson.