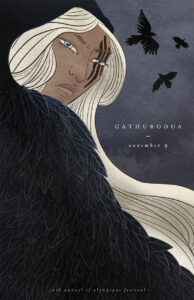 Within the goddess realm, Cathubodua has consistently remained an outsider. While her presence was intimidating and feared by many, she was an important and necessary divinity. Cathubodua preferred the company of humans over that of other gods, adored the spoils, smells and sounds of war, and claimed and guarded her worshippers not only from the invading forces but, more importantly, from their equally invasive gods.

For all her aversions towards the invading gods, in today’s mythological folklore Cathubodua has become a fusion of many different gods. As communities adjusted their beliefs according to their personal needs versus the communal needs of early humans so too changed Cathubodua’s spiritual meaning and significance.

What do we know about Cathubodua? We know about her earliest origins. She was a Gaul goddess of war (and eroticism), her birthplace is said to be in Eastern France. She took what she wanted both sexually and through warfare, often mixing the two. She is occasionally confused with the Irish Badb Catha, another powerful goddess. She is also often linked to the Greek goddess Nike and even more so to the Norse goddess Sigyn (wife of Loki). Her name, Cathubodua (cat-u-baw-wa) translates as the “Raven of Battle.”

What’s with all the ravens?

Ravens, on the European continent at least, have predominately been linked to death. This connection to death is, of course, the simplest of interpretations. When searching for a less literal explanation of the relationship between Cathubodua and her ravens, the birds have also come to signify wisdom, otherworldliness, and healing. These three concepts are deeply connected to death, and if studied a bit more, Cathubodua offers wisdom in death, a path from this world to the next, and closure to those who remained behind.

In the mythology of the Gauls, Cathubodua often takes on the characteristics of the ravens, sometimes even taking on their physical form. Much like a raven, her presence is often seen as an omen of bloodshed. Her keen intelligence allows her to see the future and prophesize, the war chants spilling from her mouth are much like the furious shrieks of provoked ravens. In the aftermath of one of her many wars, Cathubodua “feeds” on the souls of the dead soldiers in much the same way a flock of birds would feed on their flesh. It could be argued that the ravens associated with Cathubodua became an ever-lasting symbol of death and their mere presence a reminder of her core role as a soul collector.

Of her play about Cathubodua, Alma Pasic writes:

“A few years ago, in the middle of the summer, I found myself following closely the news regarding some war criminal from a little country now long forgotten by most. Having been born in one of those war-torn places much too difficult to pronounce and locate on maps, I am well aware of how it feels to have your life cheapened by being demoted to an afterthought, a random statistic in some antiquated history book. And so perhaps because of this reason alone, I couldn’t stop watching the news that summer.

Years and years after the crimes against humanity took place in that little country, the victims had finally gathered together to testify about the crimes forced upon them by fanatical militiamen. The leader of the fanatical forces, the accused general, faced the victims. Witnesses took their stand, some crying, some whimpering, some attempting to reclaim what was left of their forever scarred lives. One after another, people fell apart on the stand. All at once, their well-prepared speeches gone down the drain. The barely reclaimed peace shattered yet again.

As they spoke my eyes would travel to the man they all faced. There he sat! The general! Just sitting there, glaring back at his victims, snickering, sometimes picking his nails, sometimes even sleeping.

Hundreds of war victims continued to speak for what seemed like years, often even appearing as if they wanted the general to hear and understand their grief. Even after knowing what he was capable of the survivors continued to hope for an ounce of humanity within the soul of the man who sat from across them. To no avail, the general would not budge.

And then eventually, the judges had decided they’ve had enough. They sentenced him and moved on to some other war profiteer from some other equally troubled country. While they read his sentence, the general barely blinked. But was I really surprised by his nonchalant manner? Certainly not although I must admit, I too like his victims had hoped for something more. Perhaps a glimpse of sympathy, a grain of kindness, tenderness.

The memory I speak of resurfaced recently while I began working on my play. Inspired by the goddess of war, goddess Cathubodua, I ask: Who creates monsters? What happens when one’s entire identity is shaped by war? Most importantly, I also ask: What happens when peace rears its pretty head and war is no more? What then?”

CATHUBODUA or BULLET PROOF by Alma Pasic
Directed by Sophia Mia DiPaola
Staged Reading on November 9, 2019 at The EXIT Theatre

Alma Pasic is a poet and playwright. Recently, she published a collection of poems: Whispers, Glances. Her poetry has appeared in poetry magazines, and she participated in various short play festivals. Alma holds degrees in Performance Arts, Museum Studies and Humanities (emphasis on Russian literature). When not writing, Alma works as a historian and is currently experimenting with creating visual installations.

The image of Cathubodua was created by Liz Conley.