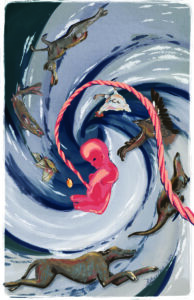 According to Welsh legend, Ceredwin, sorceress and goddess of agriculture and the things that support it (the cycles of nature, harvest, liquids), has a beautiful daughter Creirwy, and an ugly son Morfran. To improve Morfran’s prospects, Ceredwin decides to brew up a cauldron of magical potion to imbue him with wisdom, a poetic nature, and other magical abilities. Unfortunately, sorcery like that takes a year and a day of slow cooking, so she hires a local boy, Gwion, to continually stir the mixture. When Gwion accidentally consumes the first three drops, he gains all the benefits of the potion and the rest is rendered poisonous. What’s a doting mother to do…? Gwion isn’t about to wait to find out. Using his new abilities, he transforms himself into a rabbit and runs away. Unfortunately Ceridwen transforms into a greyhound and gives chase. Transformation hijinks ensue… In the end, Gwion turns into a kernel of corn and Ceridwen turns into a chicken and eats him. Unfortunately for her, this somehow impregnates her with Gwion, and she gives birth to him. Unable to outright kill her unwanted child, she leaves him to die—which, as we all know, never works in these stories—and the baby is rescued, adopted, and grows up to be an epic poet serving kings.

Of her play about Ceridwen, Annette Roman writes: When parents compare their children to each other, focus on their failings instead of their strengths, and try to change them, they do more harm than good. Creirwy, I assume, would be annoyed by her mother’s focus on her brother. Why isn’t her beauty enough for her? Is it because he’s a boy? Does Creirwy already have wisdom, a poetic nature, and the ability to transform? If not, why doesn’t her mother make a potion for her too? Meanwhile, Morfran resents being body shamed. He thinks he’s already wise, or at least a wise guy, and maybe he isn’t an epic poet, but he can write a mean limerick, probably. On the other hand, it would be cool to be able to transform into a pony! While Ceredwin and her children squabble, Gwion’s life has undergone the most dramatic change. (In my version, he manages to escape being eaten and gestated by Ceredwin.) No longer will he have to perform menial labor for the local witch; he can parlay his new talents elsewhere. The only drawback is that since he drank the potion he can only speak in rhyming verse…

CERIDWEN or THE MOTION OF THE POTION by Annette Roman
Directed by Sophia Di Paola
Staged Reading on November 9, 2019 at The EXIT Theatre

Annette Roman is the writer/performer of three solo shows—Hitler’s Li’l Abomination, Animal Love, and Inauguration Vacation—which have toured 16 theater festivals since 2011 in the U.S., U.K., and Canada. Productions of her plays in the Bay Area include the one-act Christmas Unmoored and the short play A Relationship with History. She is currently a member of the Berkeley Monday Night Playground writers pool, and won the November ’18 People’s Choice Award for her play A Place for Elijah. She has written three plays for San Francisco Olympians over the years: Menelaus, Satyr Night Fever (with Bryant Turnage), and Victoria, or Statuesque.

The image of Ceridwen was created by Katie Leavens.