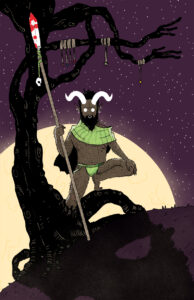 Cernunnos was a Gaulish diety of the late Iron Age whose worship spread to the British Isles and Ireland as the Celtic peoples migrated north to escape the growing Roman Empire. Often depicted as antlered like a stag, he is referred to as The Horned One, and is associated with early morning and twilight, transitional times such as the spring and autumn, the Moon, hunting, animals, the cycle of Life and Death, Time, and above all else, Nature and especially The Forest and Wild Places. Though his active worship had largely died out by the end of the first millennium, he continued to occupy a space in medieval folklore, as Herne the Hunter, for instance, a spirit said to occupy English woodlands, and as the leader of the Wild Hunt, a phantasmagoric hunting party that was said to roam the skies of England, Ireland, and Scotland, collecting the souls of the dead into its ranks as it endlessly and ecstatically pursued its quarry by the light of the Moon. Though dreadful to behold, the Hunt itself was usually perceived as a force for maintaining the balance of the universe, a type of divine justice agency similar to the Furies in Greek Mythology, and was sometimes summoned to chase away cursed spirits or evil beings. Cernunnos, as the  Lord of the Hunt, was said to sit in judgement over the souls of the recently departed. The good passed on to the Blessed Isles, and the wicked became the quarry of the Hunt. Those about whom the Lord of the Hunt could not make a clear decision, became part of the hunt itself.

Stuart Bousel’s CERNUNNOS or THE DEATH OF RUBY SLIPPERS is a modern morality fable about the search for morality in a world where most people’s morals are flexible. Set in an queer underworld of contemporary America, it is part horror story, part comedy, part road trip saga and it follows, Gareth, his psychotically murderous boyfriend Clay, and their ever-growing band of followers and hostages as they vanish into the desert on a quest to find a hidden door to an alternate world- a door only opened by blood.

CERNUNNOS or THE DEATH OF RUBY SLIPPERS by Stuart Eugene Bousel
Directed by Laura Domingo
Staged Reading on November 7, 2019 at the EXIT Theatre

Stuart Bousel is the Artistic Director of San Francisco indy theater company, No Nude Men Productions, the Executive Producer (and founder) of the San Francisco Olympians Festival (declared by the Guardian to be “Theater Festival Most Likely to Win A Gold Medal” in 2013), and the Hospitality Coordinator for the San Francisco Fringe Festival/EXIT Theatre. He was the Executive Director (and co-founder) of the San Francisco Theater Pub (winner of the Guardian’s “Best of Bay” in 2011), the Publicist for DIVAfest, the Director of New Work Development for Custom Made Theatre Company, and served as the chair of the Individual Services Committee for TBA. He has directed a number of plays for Custom Made, including M. Butterfly, The Merchant of Venice, Prelude to a Kiss, The Crucible, Grey Gardens, Six Degrees of Separation, The House of Yes, The Lion in Winter, and Passion. Other directing credits include Edward II, Phaedra, Love’s Labors Lost, Hamlet, and The Desk Set all with No Nude Men, Measure For Measure, Dick 3, and Taming of the Shrew with SF Theater Pub, the world premiere of Morgan Ludlow’s Ruth and The Sea with Wily West Productions, A Midsummer Night’s Dream, Twelfth Night, and The Frogs for Atmostheatre/Theatre In the Woods, Paradise Street, The Congresswomen, and Exit The King for EXIT Theatre, The Laramie Project for LeftCoast Theatre, and Bag of Dickens and To Bard Or Not To Bard at Killing My Lobster. He directed the world premieres of Nirmala Nataraj’s The Monk and The Book of Genesis: Re-mixed and Remastered, as well as Susan Sobeloff’s Merchants and Allison Luterman’s Oasis, all for No Nude Men. As a playwright, his work has been produced in New York, Dublin, Portland, Tucson, Melbourne, Seattle, Chicago, and San Francisco. His play Vincent of Gilagmesh was a nominee for the 2001 MAC Award; his play Matthew 33:6 was a finalist for the Sky Cooper Award in 2007; and his play Wild Blue Peaks was a finalist at HUMANA in 2002. He co-wrote the John C. Cosgrove Award winning short film Insomnia in 2000, and his play Everybody Here Says Hello! (produced by Wily West Productions) received the Theatre Bay Area Award for Outstanding World Premiere in 2014, and was nominated for Best Original Script by the Bay Area Critics Circle in 2015. He has three times had work featured in the Bay One Acts Festival: Housebroken in 2010, Speak Roughly in 2011, and Brainkill in 2012. He adapted the novel Giant Bones, by Peter S. Beagle, in 2010, and the memoir Rat Girl, by Kristin Hersh, in 2014 (also nominated for Outstanding World Premiere, TBA Awards). His play Pastorella was nominated for the 2015 Theatre Bay Area Award for Outstanding World Premiere and additional works, Adventures in Tech (With Pillow Talk On The Side) and Twins received premiere productions at PianoFight, and Gone Dark at Otherworld Theatre Company. He is the recipient of the SF Weekly’s “Ringmaster Award” in Best of the Bay 2013, and his other work includes penning the online short film Wish U Were Here for Hosteling International, the novel Dry Country, the libretto of the short opera Devil’s Deal for Opera Theatre Unlimited, and co-editing two collections of new work by Bay Area playwrights, Songs of Hestia (2012), and Heavenly Bodies (2014), both published by EXIT Press, each including a full-length play by him: Juno En Victoria and Hyperion To A Satyr, respectively. With Megan Cohen he co-founded the monthly Bay Area writer/actor meet up Saturday Write Fever. His Bay Area acting credits including the Actor’s Theatre of San Francisco (Jacob Marley’s Christmas Carol), The EXIT Theatre (Confessions of a Catholic Child), The Bay One Acts Festival (Future of the Female) and The Custom Made Theatre Company (Chess). More information about his work can be found at http://www.stuartbousel.com

The image of Cernunnos was created by Cody A. Rishell.