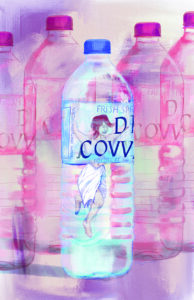 Coventina was a Romano-British goddess of wells and springs, often depicted in triple-form or with two attendants. She is known from multiple inscriptions near Carrawburgh on Hadrian’s Wall (Northumberland county, England); there are also inscriptions in Hispania and Narbonensis that are disputed as being of her. Associated with attributes of renewal, purification, and birthing, coins were tossed into her well as an invocation of luck and abundance. Dating of artifacts found in Coventina’s Well suggest that is was abruptly boarded up, perhaps in relation is avid anti-Pagan practices of Theodosius the Great.  The well itself was a spring in a rectangular basin; the contents of the well included over 10,000 coins ranging ages, a relief of three water nymphs, the head of a male statue, two dedication slabs to the goddess Coventina, ten altars to Coventina and Minerva, two clay incense burners, and a wide range of votive objects.

Not much is known of the history surrounding Coventina though her importance can not be ignored. She stands protective and relevant over ancient ruins that held the basis of life.

Water stands strong as an important symbol throughout cultures, religions, and history. It is safety and healing, it is turmoil and hardship: water is all encompassing.  It will wash away and renew, purify all that has been tainted. Life has always flocked to and settled around this sustaining energy.

But the sharing of a valuable and necessary resource has been flipped on its head as corporations hoard and bottle up drinkable water.  Waste is dumped into tributary feeding bodies of water.  As we squander resources, one can’t help but wonder – what happens when the well runs dry?

COVENTIA or BOTTOM OF THE WELL by Mads Leigh Faire
Directed by Sophia Mia DiPaola
Staged Reading on November 9, 2019 at The EXIT Theatre

Mads Leigh-Faire (he/him/his) is excited to be working with the San Francisco Olympians Festival for the first time! As an artist, he is interested in exploring everything that makes the theater interactive and accessible. They greatly enjoy collaborating on works by underrepresented demographics. Joseph Campbell’s work in the cross-cultural analysis of mythology has greatly inspired their work. Mads is currently serving in a year-long Special Events Fellowship with the American Conservatory Theater. He also performs locally as drag thing Holden Wood. In their free time, Mads enjoys petting other peoples dogs and fantasizing about what it would be like to be a master archer. They also have a lot of feelings about the sentience of droids in the Star Wars canon.

The image of Coventia was created by Katie Leavens.