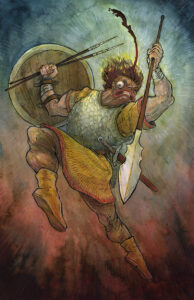 Cu Chulainn is a monolithic hero in the canon of irish myth, and his full story goes well beyond the events of the Tain, also known as the Tain Bo Cuailnge, or the great cattle raid of cooley.  The Tain is only one of Cu Chulainn’s many adventures that span through Irish and Scottish folklore. Like many ancient heroes, he was born to a virgin mother, Deichtine, who was impregnated by the god Lugh, a powerful deity from the first people or Tuatha Dé Danann.  Born Setanta, the boy quickly showed signs superhuman strength and dexterity, like when he single handedly beat up a hundred and fifty young men at the age of seven.  Setanta claimed his better known alias when he accidentally killed Culann’s famously vicious hound on the way to a feast Culann was hosting. Setanta felt so bad about killing his great beast, that he offered to be the house’s guard hound, thus earning the name Cu Chulainn, or the Hound of Culann.  Many of the greatest episodes of Cu Chulainn’s ability and heroism are depicted in the Tain. In the Tain, Queen Medb, jealous of her husband Ailill’s prized bull, raises the largest army Ireland has ever seen, to take the only other bovine comparable to her husband’s, the brown bull of Cuailnge in Ulster.  While the army approached from the south, all seemed lost for the men of Ulster, as a periodic curse has laid down every man in the country, except of course, for Cu Chulainn. Cu Chulainn then wages a guerrilla style war on Medb’s army with the help of his trusty charioteer Laith. He successfully bogs the enemy down behind a river, and guards the only ford to pass.  With Cu Chulainn at the only crossing, Mebd agrees to his terms of single combat, with the catch that she can keep sending challengers every day for as long as they still have men. The long list of men and what families they belonged to and their place in Irish folklore and their deaths by the hound of Culann makes up the bulk of the rest of the Tain.  In one fight, Mebd is able to convince Cu Chulainn’s childhood friend Fer Daid to challenge him. After a long battle, Cu Chulainn was able to stab Fer Daid in the heart, but not without receiving brutal wounds himself. At this point the gods intervene, and they heal him from the brink of death for three days. In his absence, the men of Ulter are finally able to rise from their curse, and behind Concubar, their king, are able to push back Mebd and her forces.  In the end, the war accomplished little. Medb had abducted the great brown bull early on in the campaign and transported it back home. There the two great bulls fought for dominance at first sight, and the brown bull of Cuailnge kills Ailill’s bull before escaping back to Ulster. Cu Chulainn continues to have adventures after the Tain, but Queen Medb never forgives him, and these events come back to haunt our hero.

Cu Chulainn, much like Hercules or Superman, is a hero of seemingly limitless strength and ability.  He’s able to decapitate scores of men with a single swing of his sword and lift up entire rivers in order to divert their course.  Although he is a kind of wild monster in battle, Cu Chulainn’s appearance is of a young beardless lad. He looks so young that some of the men in Medb’s host refuse to fight him at first because it would make them look weak to fight a child.  The Tain goes into incredible detail describing each and every warrior who either volunteer or are coerced to fight Cu Chulainn, from each of their long, proud family histories, to the color of their amor, to the specific shape of their shields.  These unique characters are introduced with pomp and applaud by the important members of Medb’s camp, and then sent off to face Cu Chulainn, where he kills them in single combat almost instantly. Each new champion comes before him with their own unique fighting style or tactic or special weapon, yet each of them die immediately, most often in gruesome ways. The ease with which Cu Chulainn seems to have bringing down each man after all the detailed exposition about them makes me chuckle.  There is a morbid humor of Medb sending man after man to their ultimate demise while promising the same wonderful gifts if they should win. In fact there is a lot of humor to be found in the Tain. From the weird, sexy pillow talk between Ailill and Medb, to the old grandfather warrior who’s testicles hang below his shield, there’s moments of both silliness with the macabre humor. The Tain also reflects on the toll that this consistant fighting can have on someone, even on a hero. Cu Chulainn is never always pleased with who he must face every morning at the ford, and when friends from his childhood are talked into challenging him, he shows remorse before ultimately having to killing them too.  We see him beaten and tired and wounded and bloody from single handedly fighting off an army, which is perhaps the best known motif surrounding Cu Chulainn. That of the hero battered, broken, bloodied, but still fighting on against the odds. For even though he’s god the strength of a god, I still love to see the hound of Cullen as the underdog. And that’s what I think ultimately draws people into the stories of Cu Chulainn, because everyone loves an underdog.

Kyle McReddie is an actor, fight choreographer, and writer native to the Bay Area.  He can be seen here at the EXIT as a house manager and performing in local productions such as The Congresswomen and Paradise Street (EXIT Theatre), Twins (Pianofight), and Six Degrees of Separation (Custom Made).  He is also earning his teaching certificate in stage combat through Dueling Arts International, with whom has trained in fighting for the stage for the last nine years.  Kyle has choreographed fights for theatres across the bay including Shakespeare in Love (Palo Alto Players) and Vampire Christmas (EXIT Theatre).  He also teaches stage combat at high schools in San Francisco including Lick-Wilmerding and Drew School.  Kyle has also performed three times before for the Olympians, so he is no stranger to the Festival, and is very excited to be writing his own piece this time around.

The image of Cu Chulainn was created by Brett Grunig.