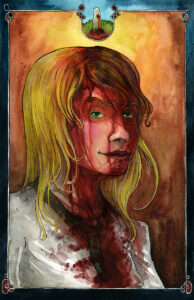 Deirdre, best-known by the epithet “Deirdre of the Sorrows,” is the foremost tragic heroine in Irish mythology.

From the very beginning, Deirdre was cursed. Or even before she was born. It was Cathbad the chief druid who foretold the tragic future of Fedlimid’s unborn baby girl, prophesying that she would grow up to be the fairest woman in the world, but her beauty would lead to disaster: Not only was she doomed to suffer, but she was also doomed to bring suffering to many, including three of Ulster’s most important men. The druid also warned that she would be the cause of many misfortunes and sorrows, and there would be wars and much blood would be shed because of her. The King Conchobar ignored this prophecy, however, since he was aroused by the image of her prospective beauty and wanted to make her his wife when she came of age. He ordered the wise old woman Leabharcham to raise her in the forest in total seclusion and to bring her back only when she was old enough to become his wife.

But one day, the old nurse told Deirdre about Naoise, a handsome young warrior with snow-white skin and raven-black hair who had previously appeared in Deirdre’s dreams. Upon meeting him, Deirdre immediately fell in love and soon the couple eloped in hopes of changing her destiny (so she wouldn’t have to marry the King Conchobar.) Accompanied by Naoise’s brothers Ardan and Ainnle, they travelled all over Ireland but people were unwilling to help them in fear of being punished by Conchobar. They fled and eventually arrived on a remote island off the coast of Scotland, where they lived happily for a while (according to some versions of the story, the couple had children, a son Gaiar and a daughter Aebgreine, who were fostered by a Sea God Manannan Mac Lir) until one evening, a messenger showed up with a letter from the King, conveying his forgiveness and request that Naoise and Deirdre return. Deirdre didn’t buy it. She couldn’t trust the King, who she was sure was trying to deceive them with a false promise, and wanted to stay on the island. However, persuaded by Naoise who believed the news, she went home with him, only to confirm that her hunch proved right because they were actually walking into a trap.

What ensued was a series of tragic events: No sooner had they entered the fortress, than they were attacked by Cochobar’s warriors and Naoise along with his brothers were all killed, though they fought bravely to the very end. After Naoise’s death, Conchobar made Deirdre his wife as he had planned, but later, fed up with and angered by her coldness towards him, he gave her to Eogan mac Durthact, the man who had murdered her husband Naoise. Now being caught between the two men she hated most, and in a fit of rage and madness, Deirdre committed suicide by throwing herself from the chariot and dashing her brain out on a standing stone. Others say that she went insane with grief at the sight of Naoise’s dead body and died right there of a broken heart. Therefore at the end, what the druid had prophesied came true and Deirdre had brought sorrow and misfortunes to Ulster.

Ai’s play Deirdre begins where the existing story ends: The now-dead Deidre arrives in the Underworld where she meets other female mythological figures, who have also been victims of misogynistic ideology: Izanami, the Goddess of Death (in Japanese mythology,) Eurydice, an oak nymph and Orpheus’ wife (in Greek mythology,) and Persephone, the Queen of the Underworld and Hades’ wife (in Greek mythology,) are there, all having been abandoned and confined by their husbands. It’s a play about friendship among the women/goddesses from different cultures and traditions (who however share similar experiences) and their struggles to rise above the pain, rage and humiliation and to resist and fight their ill-starred destinies. By combining different mythologies/legends and exploring untold, unheard and unknown stories, Ai hopes to retell them in a way that would do justice to the female characters mentioned above. But how are they going to “fight” when they’re imprisoned in the Underworld and against whom? And isn’t it too late? (They’re dead!) We’ll see. In any case, one thing is for sure: This Deirdre is not sorrowful but furious. And she wants to subvert the situation in order to become the heroine of her own narrative — which is no longer tragic but heroic.

DEIRDRE or DEIRDRE THE QUEER QUEEN by Ai
Directed by Finn Ware
Staged Reading on November 15, 2019 at The EXIT Theatre

Ai is a Japanese-born playwright, poet and artist who works across genres and languages. They hold an M.F.A. in Playwriting from San Francisco State University and have worked as a Creative Writing instructor at SFSU, and as a journalist and a children’s book author/illustrator in Istanbul, Turkey, where they lived for seven years. Currently, they are a member of the Berkeley Rep PlayGround Writers Pool and a teaching artist at the SF Youth Theater and Ruth Asawa School of the Arts. Their work has appeared in various literary magazines and their children’s book was published by National Geographic in 2013. Their plays have been seen/staged-read at the Exit Theater, Shelton Theater, PianoFight, Theatre of Yugen, Z-Space and the SF Olympians Festivals. They’re a recipient of the TBA CA$H Performs Grant (for their full-length play Puppet Show,) a winner of the Leonard Isaacson Award Browning Monologue Contest and the Austin International Poetry Festival, and a semifinalist for the Beverly Hills Julie Harris Playwright Award Competition. They studied Noh playwriting and Butoh in Japan.

The image of Deirdre was created by Brett Grunig.