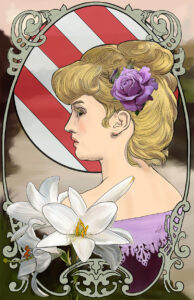 The first fleshed out telling of Elaine of Astolat’s story is in Thomas Malory’s Le Morte d’Arthur. Arthur and his knights arrive at Bernard of Astolat’s castle for a joust tournament. Sir Lancelot decides at the last minute to join the tournament, and while in Bernard’s home, Elaine falls in love with him. She begs him to wear a token of hers while he jousts, which puts him in a tough spot. He and Queen Guinevere are in the midst of their affair, so he must be in disguise in order to wear Elaine’s token. During the joust, he is injured and stays in Elaine’s chambers while she nurses him back to health. When he is well, he offers to pay her for her trouble, making it clear her feelings are not returned. Elaine is insulted. Lancelot leaves sheepishly, and within ten days, she dies of a broken heart. Her last wish was for her body to be sent by boat to Camelot with a letter to Lancelot in her hands.

“I am half sick of shadows,’ said The Lady of Shalott.

The Lady of Shalott, both a poem by Alfred, Lord Tennyson and a painting by John Waterhouse (which the playwright most certainly had on her wall her Freshman year of college), is a variation of the story of Elaine of Astolat. Due to Tennyson and Waterhouse’s popularity, this may be the most familiar version of the tale.

The Lady of Shalott lives under a curse, trapped in a castle near Camelot. Due to her curse, she can’t look directly outside, so she relies on a mirror to give her a glimpse of the world she’s forbidden from. One day, she spots Sir Lancelot and is immediately enamored – so much so she reflexively looks out her window to gaze upon him. When she realizes what she’s done, she knows she will die. She leaves her castle, and heads to the river where she finds a boat with her name on it. She gets in the boat, and casts off down the river towards Camelot. By the time she arrives, she’s dead. With no letter, no one knows what happened, but Lancelot acknowledges her beauty and says a prayer for her.

Of her play on the subject, O’Connor writes: “Yeah, so, I’m riffing on the idea that Elaine of Astolat is a bored, privileged teen with an overactive imagination (I mean, who falls in love at first sight AND dies of heart break? Melodramatic, much?). In my monologue, we’re on the boat with Elaine in her final moments… and it’s A LOT.”

ELAINE OF ASTOLAT by Meghan O’Connor
Directed by Stuart Bousel
Staged Reading on November 22, 2019 at The EXIT Theatre

Meghan Kathleen O’Connor is a writer, comedian and podcast host based in the Bay Area. Her work has been produced in San Francisco, Dublin and St. Petersburg. She is very excited to return to the Olympians Festival as a writer for the sixth time, because she loves this festival HARD. Meghan is a writer and director for SF’s premiere sketch comedy company Killing My Lobster, and co-hosts Vicious Cycle, the podcast about periods and the people who get them. In her abundant freetime (LOL), she performs with her improv team The Ballroom, and with fellow comedian Eric Rubin in their band Claptrap.

The image of Elaine of Astolat was created by Lacey Hill Hawkins.