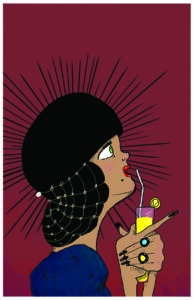 Elaine of Corbenic is the daughter of King Pelles, the mother of Galahad, and spends most of her life either trying to gain the admiration of Sir Lancelot, or trying to make more of their relationship than can possibly be accomplished. The young and beautiful Elaine was imprisoned in a boiling bath until she was rescued by Lancelot whereupon she instantly fell in love with him. Lancelot was unmoved due to his ongoing infatuation with Queen Guinevere. Distressed, Elaine of Corbenic begged Dame Brusen for help which she granted…in the form of tricking Lancelot into thinking Elaine was Guinevere, resulting in a surprise pregnancy. Thinking that eventually Lancelot will learn to love her, she keeps popping up in his life, and Dame Brusen tricks him into thinking Elaine is Guinevere a second time, the result of which is Guinevere catching Lancelot with Elaine, and declaring that she never wants to see him again. Lancelot goes mad for a time, and shows up in Elaine’s garden. She takes him to the Holy Grail, curing him, and he chooses to stay with her for some time after that, trying unsuccessfully to make their relationship work in spite of years of chaos.

In Allison Page’s short solo play, we find Elaine of Corbenic hosting a luncheon at home shortly after the birth of Galahad, who will eventually become the greatest knight ever known. But right now he’s just a little baby, and Elaine is unraveling. Then again, she’s always unraveling. That’s what she does. And she does it publicly, over and over again. While she and Lancelot are still trying to make things work, and living together, she often doesn’t know where he is or what he’s thinking. Including right now, when he’s supposed to be at this luncheon. The cocktail weenies are aplenty, the lawn chairs are set out, and Elaine of Corbenic, once again, finds herself alone in a crowd and about to face some harsh realities — even harsher than spending eight years in a boiling cauldron.

ELAINE OF CORBENIC by Allison Page
Directed by Stuart Bousel
Staged Reading on November 22, 2019 at The EXIT Theatre

ALLISON PAGE is a writer/actor/comedian originally from northern Minnesota. Her full length play HILARITY was produced by DIVAFest in 2015, and her semi-biographical play KILGALLEN/JONES was produced by The EXIT Theatre in 2017. Her full length play VAMPIRE CHRISTMAS, co-written with Stuart Bousel, also produced at EXIT Theatre, finished its world premiere run in December 2018. She has been the Artistic Director of San Francisco sketch comedy company Killing My Lobster since 2014. This is the 5th play she’s written for the San Francisco Olympians Festival.

The image of Elaine of Corbenic was created by Cody A. Rishell.