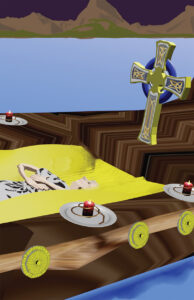 Well, there sure are a lot of Elaines in Arthurian mythology. As the half sister of King Arthur, Elaine of Garlot has been overshadowed by her much more well known half-brother. Not only does she have to contend with King Arthur’s larger than life historical presence, she is also the lesser known sister of Morgan Le Fay and Morgause. Much of her story is lost or deemed unimportant by time- the only mention of her in Thomas Malory’s Le Morte D’Arthur is one sentence saying that she married “…King Netres of the land of Garlot.” The small bits we do get of her tale are almost entirely defined by information centered around the other people in her life- her sisters, her brother (of course), and a tiny mention of her son from Monmouth’s The History of the Kings of Britain. Many of the texts get Elaine’s name mixed up with Anne, if that’s any indication on how insignificant of a player Elaine of Garlot had been considered.  If your brother was King Arthur AND if your sister was considered by many works to be a witch and one of the enemies of The Round Table, you would probably feel a little stuck in the dark.

Of her play about Elaine, Elain Gavin writes, “As a fellow Elaine, I’ve been curious what Elaine of Garlot would have to say now. Maybe she’s not so quite and simple as mythology has labeled her. Maybe she has a great deal of noise to make now that she has seen how easily her side of the story has been erased. Her sister and brother had their turn- now is the age of the forgotten sister. The short play Elaine Is My Name will explore how one ancient Elaine gives one contemporary Elaine a swift and much needed kick in the butt.

ELAINE OF GARLOT or ELAINE IS MY NAME by Elaine Gavin
Directed by Megan Briggs
Staged Reading on November 21, 2019 at The EXIT Theatre

Elaine Gavin received her BA in Drama at SFSU and has been writing and performing in the Bay Area for almost 14 years. She has been a member of San Francisco’s sketch comedy troupe, Killing My Lobster for the last five years. She is proud to call KML her comedy home, a community in which she writes, performers and teaches. She is looking forward to directing 826 +KML= BFF’s, Killing My Lobster’s collaborative project with young writers through 826 Valencia. Elaine has also written plays for PintSized and was a finalist in ShortLived Playwriting competition. She has written plays for middle schoolers at Redwood Day School and is a former copywriter and editor for Hoodline News and Events. She has performed for two years in the Olympian Festival but this year is her first time writing and she ecstatic to share her piece with the world. Elaine is also a preschool teacher which has taught her to walk carefully, listen hard, and sing loudly.

The image of Elaine of Garlot was created by Rogernald “Rusty” Jackson.