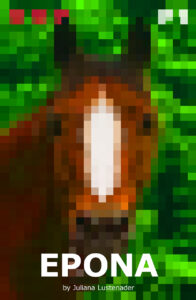 Epona is known as the protector of horses, ponies, donkeys and mules in Gallo-Roman religion. She is the only Celtic god to be widely worshipped throughout the Roman Empire, though her name – meaning ‘Great Mare’ – is derived from the Gaulish language. Her image has been found carved on the sides of stables and she is almost always depicted riding or standing by a stead. Epona is often compared to Rhiannon of the Mabinogion because of her depictions with young fouls, which hint Epona may have also been a goddess of fertility. She is still celebrated today on Mackinac Island, MI, where the only form of transportation on the island is horseback and every year in June, feasts and parades are held in her name.
Despite having her own pony in the back yard, Juliana grew up like most youngest chidren in the 90s – watching their older siblings play video games. She especially loved watching her brother play The Legend of Zelda: Ocarina of Time, a Nintendo game where the hero Link tries to save the princess Zelda while riding atop his trusty stead, Epona. Juliana will use the structure of Zelda: Ocaraina of Time – a game she knows far too well – and her personal knowledge of horses and young dumb gamer boys to guide her writing process. She plans to infuse the strength and hard work associated with Epona into a short play ultimately about the struggles of puberty and good old-fashioned family squabbling.

Juliana Lustenader is a Bay Area native artist. Though she is no stranger to the Olympians Festival, 2019 will be Juliana’s first year participating as a writer. Last year she directed the two one-act plays inspired by Remus and Romulus and in 2017, she directed Stuart Bousel’s full-length play celebrating Adonis. Juliana’s short plays have been staged in festivals at Pianofight and San Francisco State University. Though she enjoys writing and directing, Juliana is most often seen on stage. She has performed in plays and musicals at Custom Made Theatre, Faultline Theatre, New Conservatory Theatre, Hillbarn Theatre, Central Works, Ray of Light Theatre, Shotgun Players, and many more local theatre companies. Juliana is also the Artistic Director of Shakespeare at the Club, a company member of Custom Made Theatre, and a proud graduated of SFSU’s Theatre Arts Department. In her spare time outside of theatre, Juliana can be found performing her original music in the folk band Baird & Beluga or designing a hand-knit sweater. www.JulianaLustenader.com

The image of Epona was created by Ruben Rohde.