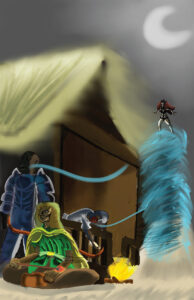 Fionn Mac Cumhaill is one of the epic heroes of Irish mythology. The product of a forbidden union, Fionn and his mother were cast from her native kingdom. He was raised in secret by a druidess and a female warrior, who taught him to fight and hunt. When he came of age, he sought revenge from the man who usurped and killed his father. Rather than challenging him to battle, though, Fionn discovered that his father’s people were plagued by a fire-breathing giant named Aillen. For the past 23 years, on every Samhain, Aillen would lull the men of Tara to sleep with a magical harp and then burn the city down. Fionn managed to resist Aillen’s music by placing a burning spear to his forehead to use the pain to keep himself awake. He defeated Aillen, and as made ruler of Tara by his father’s killer.

Fionn is an American who has come to his family’s ancestral home in Ireland to hopefully discover what happened to his missing father. After a difficult journey, he arrives at the gothic monstrosity of a manor house just as its inhabitants are setting up for a party to celebrate Samhain. The home was supposedly built on a sidhe, an earthen mound home to the beautiful and dangerous aes sídhe, the fairy folk of the mound. At first, Fionn is charmed by the stories and feels a connection with his ancestry. But as the night progresses, strange and disturbing things begin to happen around the house. Somehow, most of the guests have vanished somewhere within the house and he finds himself confronted with visions that are the stuff of nightmares, dreams, and fantasies. He suspects that he’s become the pawn in a dangerous game between two people who many not even be human. This play will explore ideas of identity, ancestry, and the dark things that lurk in the back of the human mind.

Neil is an actor, writer, and director who has been making theatre in San Francisco for over a decade. He has written for the Olympians festival ever year since the second year. He is also on he board and steering committee of Left Coast Theatre, a non-profit LGBTQ+ theatre company.
The image of Fionn Mac Cumhaill was created by Rogernald “Rusty” Jackson.