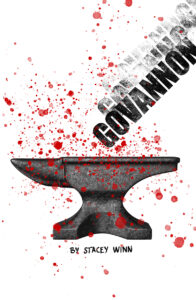 The Welsh god Govannon, or Gofannon, is a peripheral character in the Mabinogion. A child of Dôn, Govannon is implicated in the demise of his nephew Dylan, but few details are provided other than it was one of “three unfortunate blows.” He is also one in a long list of figures whose assistance is needed if Cullwch wishes to win Olwen’s hand.

Beyond that? Few details were preserved regarding Govannon in the Fourth Branch of the Mabinogion. He’s a metalsmith and if we expand our focus to his Irish counterpart, known for the brewing of an ale of immortality. He and the other children of Dôn are included in the Bonedd yr Arwyr, an unpublished collection of the genealogies of Welsh heroes. More children of Dôn appear in this manuscript than are mentioned in the Mabinogion, leading some scholars to believe that independent tales regarding Dôn and her family have been lost to time. An unfortunate blow, indeed.

The apparent blank space around Govannon intrigued me. He kills his nephew Dylan, but his motivation and the circumstances around the act are utterly opaque to the reader. Dylan’s death is often referred to as accidental, but I can’t for the life of me find a primary source that explains why!

Dylan’s death is named one of three unfortunate blows, but translators of the Mabinogion handle this moment differently; some call the blows unfortunate, others call them fatal. Perhaps more frustratingly, the other two blows are never identified! A violent triad is promised in the fourth branch, but unfulfilled. This apparent loose end is a sharp contrast to the Second Branch, where three unfortunate blows are not only completed but accompanied by three unfortunate disclosures and three fortunate concealments.

So, I started my exploration of Govannon with a few questions. Why did he kill Dylan? What were the other two fatal blows? Do the shades of meaning between “unfortunate” and “fatal” hold clues to help us discover what has been lost? Why does the Fourth Branch gesture toward the triad leitmotif without actually completing it?

My research started to feel like poking around in a family mythos designed to disguise major trauma; when no one can actually tell the whole story—either because the events happened too long ago to remember or because they are too painful to discuss—how does a family move forward?  How do we form an accurate concept of self when bits of our history are elided, obscured, or lost without hope of recovery?

GOVANNON by Stacey Winn
Directed by Lana Palmer
Staged Reading on November 13, 2019 at The EXIT Theatre

This is Stacey’s second time writing for the festival. Her introduction to Olympus was as an actor during The Monster Ball (SF Olympians V), and she’s grateful for the role it has played in her life and professional development over the years. Her plays and poetry have also appeared in the ShortLived play competition and in Vinyl Poetry and Prose, while her nonfiction and ghostwritten works have been published by the National Cyber Security Alliance, ITProPortal, and Tech Week Europe.

The image of Govannon was created by Ruben Rohde.