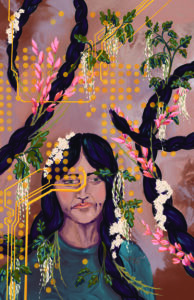 The Mabinogion’s Fourth branch, Math Son of Mathonwy, which follows the House of Don. Originating as gods and goddesses, these characters have extraordinary magical powers, along with human faults and frailties. The ancient Welsh envisioned their story in several constellations.

Math is Lord of Gwynedd. A powerful magician, both honorable and fair, at times he also needs to be restored by resting his feet in the lap of a virgin.

Gwydion is his nephew and also a potent magician. But Gwydion’s morality is often ambiguous. He lacks a sense of responsibility for the consequences of his actions.

Aranrhod is Gwydion’s sister and niece to Math. To her great shame, she fails a magic test of her virginity and bears two sons, one of whom is Llew. Some believe that Gwydion is actually Llew’s biological father. If so, this explains both Aranrhod’s abandonment of her son and why Gwydion adopts him.

Llew is thus rejected by his mother and raised by his uncle Gwydion, who uses magic and trickery to overcome three curses placed on him by Aranrhod. Her third curse keeps Llew from ever having a woman. But with Math’s help, Gwydion creates a wife for him from flowers. They call her Blodeuwedd.

Blodeuwedd becomes Llew’s wife, but falls in love with another man. They scheme together and murder Llew. Through magic, Gwydion finds Llew, transformed into an eagle, perched in a tall tree, his flesh is rotting away. Gwydion transforms him back to human form and nurses him to health. Llew then pursues Blodeuwedd’s lover and kills him. Gwydion pursues Blodeuwedd.

When he catches Blodeuwedd, instead of killing her, Gwydion transforms her into an owl, banished to the night and hated by all other birds. In the ancient Welsh star map, Blodeuwedd’s constellation is an owl.

One more character (from earlier in The Mabinogion) appears in our play: Arawn, Lord of the Underworld.

The fourth branch of the Mabinogi provides a prototype for the extremely dysfunctional family. In it, God-like mythical beings solve family problems by creating new beings. But they can’t control their creations, and all manner of unexpected troubles ensue. It’s the perfect paradigm for our modern anxiety about artificial intelligence technology, our fear —expressed in futuristic dystopian tales — that robots will take over the world, refuse to be subject to human domination, and have intelligence without morality. They will be killers, emulating the worst of humanity.

In Edward and Naseem’s play inspired by the fourth branch of the Mabinogi, three scientists struggle over the question of creation. Aran has become unraveled and abandoned her project of creating an AI with general intelligence and free will. With his mentor, Dr. Math’s support, Gwydion has taken up Aran’s project. Not only has he created LU, but he has taken the technology further, adding reproductive elements to the humanoid robot. Caught up in the hubris of creation, Gwydion is not convinced by Aran’s warnings, and doesn’t believe the prophecy that she has seen in the code. So, despite Aran’s objections, Gwydion creates B as a wife for LU. However, like the mythical children of the Mabinogi, LU and B do not cooperate with their parents.

Written in the Stars grapples with the questions of what it means to be human, where morality comes from, and the ethics of creation. In the end, it is what makes the robots most human that is what dangerous about them. In being human, they pose the greatest threat to humanity.

MABINOGION, or WRITTEN IN THE STARS by Naseem Baidey and Edward Morgan
Directed by Lana Palmer
Staged Reading on November 13, 2019 at The EXIT Theatre

Naseem Badiey is a storyteller working in multiple mediums. In addition to writing plays, she has exhibited site-specific video installations in Bay Area galleries, founded an oral history and storytelling project, directed an experimental documentary film, performed in film installations, music videos, and plays, and written a book on the Sudan People’s Liberation Army. She is an alum of Bay Area Theater’s ATLAS program and Custom Made Theater’s New Works program, and a founding member of the 51st Street Theater Company. After six years on the faculty at CSU, she now does research for the Alameda County Probation Department. She holds MPhil and DPhil degrees from Oxford University, a BFA from San Francisco Art Institute, and a BA from UC Berkeley.

Edward Morgan is a playwright and director currently based in NY. AGAINST THE GRAIN, co-written with John Kishline, premiered last fall at Danceworks in Milwaukee, then moved to the Kohler Arts Center in Sheboygan. WAY DOWNRIVER premiered at Alabama Shakespeare Festival in 2014, (then titled TWENTY SEVEN), and in 2016 it was produced at North Coast Rep, San Diego. SO YOU CAN LOOK AHEAD was a semi-finalist for the National Playwrights Conference. It had a recent staged reading at the Baltimore Playwrights Festival and a reading in Hudson, NY as the HRC Showcase Theatre’s 2018 contest winner. THE PAMPHLET was translated into Spanish and had a reading in Santiago, DR. It will be produced there in January. The play was also translated into Bulgarian and produced at New Bulgarian University. In 2017, Mr. Morgan co-wrote the book and lyrics for NO GREATER LOVE, which premiered at Mother Lode Theatre in Butte, Montana. He also co-wrote UnSILENT NIGHT, which premiered at Next Act Theatre in Milwaukee in 2016, and A RISING WIND, which was filmed for Milwaukee Public TV. A CHRISTMAS CAROL (co-adapted with Joe Hanreddy) has played at Milwaukee Rep, Clarence Brown Theatre and several universities. SOUNDING THE RIVER and APPALACHIAN VOICES were also produced at Milwaukee Rep. As a director, Mr. Morgan has worked at regional theatres, Shakespeare Festivals and universities across the country, as well as in Costa Rica, the Dominican Republic, India and Bulgaria. He’s been the recipient of various awards and nominations. He’s been a Casting Partner for Cirque du Soleil and a Senior Fulbright Scholar. He also comes to the Bay Area periodically to teach at Berkeley Rep’s School of Theatre. Mr. Morgan is a lover of Celtic mythology and literature and long ago he traveled Ireland and Brittany collecting folklore.

The image of Mabinogion was created by Katie Leavens.