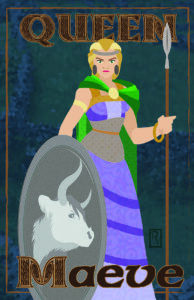 Maeve, the legendary Warrior Queen of Ireland, takes what she wants when she wants it; whether it be power, men, or prized bulls; and not necessarily in that order. She’s been described as brave and battle ready, a risk taker and an instigator, passionate and libidinous, generous yet vengeful. In other words, she’s a lover and a fighter.

Maeve was bequeathed the province of Connacht in Western Ireland by her father, Eochalb Feidlech, High King of Ireland. Thus, Connacht was the only province under female rule. As the Queen of Connacht, Maeve had the power to make kings of the men who marry her. It is said that Maeve married five times and bedded many more men than she married.

With her husband King Ailill, she had seven sons, each son given the same name to ward off an evil spell. Maeve was ultimately murdered by her nephew, Furbaide, who wanted to avenge the death of his mother, who Maeve had previously killed for sleeping with one of her ex-husbands. Furbaide killed Maeve by sling shot with a single piece of cheese as she bathed by the river.

It is said that Maeve is buried in full body armor, standing and facing north towards her enemies in Ulster.

Irish mythology is the stuff of druids and kings, heroes and warriors.

An oral history that was written down and translated centuries later; history and myth wrapped up in one.

One of the primary stories involving Queen Maeve is arguably the most epic tale of Irish myth in the Ulster Cycle, The Cattle Raid of Cooley (Táin Bo Cuilange, or simply, The Táin).

The Táin is a tale of rival courts and a brutal battle between the men of Ulster, led by the Hound of Ulster himself, the legendary hero, Cu Chulainn, and the men of Connaught led by the courageous Queen Maeve.

Unsurprisingly, given Maeve’s appetites, the origins of the great battle begin in bed, with a conversation between Queen Maeve and her king, Ailill. According to Thomas Kinsella’s translation of The Táin, in a moment of post coital pillow talk, King Ailill states to Maeve, “Great is the woman of a great man…” (Is it any surprise Maeve has a hand in Ailill’s death down the road?) To which Queen Maeve replies, “I was great before ever I had aught to do with thee.”

The couple then decide to prove their wealth and status by taking a literal inventory of their possessions.  Unfortunately for Maeve, and perhaps the hundreds of later fallen soldiers, they are equal except for one thing, Ailill’s prized White Horned Bull of Ai. Undeterred, and obviously having something to prove, Maeve puts out the call to find a superior prized bull. Lo and behold, there exists such a bull, The Brown Bull of Cooley…in Ulster. When a peaceful agreement to trade the bull falls through, Maeve decides to take the bull by force.

Maeve assembles the fiercest army in all of Ireland with not only the soldiers of Connacht but fighters from all of the other provinces to battle against Ulster. Knowledgeable of a curse put on the men of Ulster that weakens them with the pain of childbirth when they most need their strength, Maeve decides to strike, take the bull by the horns, so to speak.

Unbeknownst to Maeve, the hero and almost god-like Cu Chulainn is immune to the curse, and over the course of the next few days, he singlehandedly defeats Maeve’s’ forces. Maeve and her men ultimately retreat, but not before Maeve’s men successfully steal the Brown Bull of Cooley.

Upon arriving to Connaught, The Brown Bull promptly kills Ailill’s white-horned bull, then escapes back to Ulster, scattering the white horned bulls remains across Ireland along the way. When the Brown Bull of Cooley is finally back home, it lets out three bellows then keels over, dead.

Again, according to Kinsella’s translation, after seeing the ruin and destruction, and perhaps with what some could interpret as a statement on the futility of war; Maeve solemnly states, “We have had shame and shambles here today.”

Of her play about Maeve, Elizabeth Flanagan writes:

With a cast of characters as varied as: fiercely competitive husbands and wives, enemies and lovers, mythological heroes and warrior queens, I want to reimagine the battlefield as a battle of wits. Dinner party as battlefield, where the hostess, although seemingly with utmost power still has the desire, even the need to prove herself to those around her. And what happens when the gift you bring to the hostess is not the one she requested?”

Elizabeth Flanagan is a resident playwright with 3Girls Theatre, a member of the San Francisco PlayGround Writer’s Pool and The Stranger Playwright’s Collective, a co-founder of Ex Nihilo Theater, and previously served on the board of the Playwrights’ Center of San Francisco. You can follow Elizabeth on twitter @writesinpublic.

The image of Maeve was created by Rachel Vanderpool.