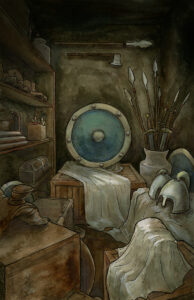 Manwydan Ap Llyr is the central figure of the third branch of the ancient Welsh mythological cycle known as the Mabinogi. One of the few survivors of a royal line, he attempts to take up a simple life as a craftsman – first as a saddle maker, then as a crafter of shields, and finally as a shoemaker. But each time, he proves to be just too gosh darn talented and all of the local townspeople threaten to murder him for stealing all of their business. He eventually finds happiness as a farmer, once he resolves a little incident with a cursed golden bowl and a shapeshifting mouse.

The Irish god of the sea is known as Manannán mac Lir and, depending on who you ask, is either exactly the same as Manwydan or another being of absolutely no relation. I choose to believe it’s the former, because it makes for a more multifaceted individual. Manannán is sometimes a trickster, sometimes a paternal figure. He acts as a foster father to the warrior Lugh and gifts him with a cloak that prevents all wounds and a sword whose wounds cannot be healed. In another legend, Manannán lures the grandson of a king with a shining branch that plays beautiful music. In the end, Manannán sends him home with a chalice that breaks into pieces whenever a lie is spoken into it.

When learning about Manwydan Ap Llyr, what struck me most was the amount of stuff he had. In addition to all of the goods he made as a workman and the gifts he presented to Lugh, he had a horse that could walk on water, a ship that did not need sails, and seven pigs that, when eaten, would come back to life the next day. Having recently made an international move (okay, it was to Canada – but that still counts!) I have some feelings to process about culling down my possessions to the minimum amount. And with the recent trend of Tidying Up, Marie Kondo style, it seems that I’m not alone. The many lives and many possessions of Manawydan Ap Llyr is a great vessel for exploring how our things define who we are. When you’re forced to choose between the magic pigs and the magic helmet, you’re bound to learn something about yourself.

MANAWYDAN AP LLYR or A VERY TIDY STORY by Kirk Shimano
Directed by Lana Palmer
Staged Reading on November 13, 2019 at The EXIT Theatre

Kirk Shimano has been a writer for the Olympians Festival since 2011. This is his second year contributing from afar, having recently moved to Vancouver, British Columbia. His past works include The Judgment of Paris Is Burning, a traditional retelling of the precursor to the Trojan War (featuring drag queens) and Hero Creature Work, a study of life in the visual effects industry when scrambling to create a digital Pegasus. He is currently developing Giant Robot Tech Support, a play which melds his day job (creating digital tools for artists) with his dream job (piloting a giant robot mecha against invading alien monsters)

The image of Manwydan Ap Llyr was created by Brett Grunig.