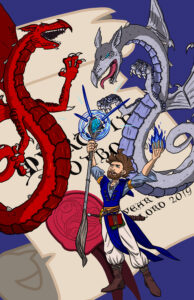 The magician, enchanter, & seer we know as Merlin begins with Geoffrey of Monmouth’s Historia Regum Britanie. In the 12th century text, which was generally regarded at the time as a basis for British history, Geoffrey inserted Merlin into the Arthurian legend. Merlin is born from a king’s virgin daughter and a demon. He has no known father. King Vortigern’s ill-advised invitation of the Saxons to become his mercenaries has gone awry. They have taken over and Vortigern has lost much of his land. His attempts to build a new fortress as protection against the barbarians have mysteriously failed. Building materials disappear, and the structure collapses. He confers with his advisors, who tell him to find a bastard child as a blood sacrifice. Merlin is found and brought forth, but precocious as he is he reveals the truth behind the tower’s instability – dragons. Two of them, one red and one white, sealed inside vases in a pool under the fortress’ foundation. He advises them to release the dragons, which they do. The red dragon drives away the white one, which according to Merlin predicts the coming of Arthur, who defeats the Saxons.

While Merlin aids in the conception of Arthur, he drops out of the story before his birth. Though they never actually meet in his largely fictional “history”, Geoffrey’s pairing of the characters paved the way for the Merlin-Arthur relationship as we know it. Later writers would establish Merlin as Arthur’s mentor. Despite numerous retellings and reinterpretations, the Merlin character has remained ubiquitous and largely unchanged in the King Arthur story for almost 900 years. Even a reimagined Merlin invariably remains, at his core, the same supernatural enchanter inextricably linked to the ancient British king.

There is evidence that a Celtic bard, pagan, and (possibly) druidic figure named Myrddin Wyllt lived in the 6th century, ultimately driven mad by the horrors of war. There are brief historical accounts, as well as several poems attributed to him which have likely undergone some appropriation and embellishment. Comparisons have also been drawn between Myrddin and others in Celtic legend, namely Lailoken, with whom Myrddin could be an amalgam. This conflation arises in Geoffrey’s later work, Vita Merlini, in which he purports to adhere more authentically to the Myrddin legend.

While any truth to the story of the Welsh prophet was overshadowed the moment Geoffrey’s hugely popular Historia hit the shelves, it’s the wild man of the woods who has captured my imagination. The Myrddin of Welsh legend is utterly human, relatable and fragile, navigating a harsh and quickly changing world as one might. As a young man he wields both the sword and the word. The latter likely more deftly since there’s little, if any, account of his prowess in battle. He becomes expert in the power of language, and the artful bard earns prestige and wealth in the court of Gwenddoleu, the 6th-century pagan Welsh king who ruled Arfderydd in the area near Hadrian’s Wall. Myrddin’s beliefs, and those of his people, are at odds with encroaching Christianity. During the battle of Arfderydd in 573, Gwenddoleu and his army are obliterated by Christian forces. Devastated by the loss of everything he knows, and wracked with guilt over his part in his nephew’s death, Myrddin seeks refuge in the Caledonian Forest and becomes one with nature. There, the Welsh legend of the wild man of the woods takes hold. He transforms, possibly while practicing a shamanistic rite, and enters the realm of lore as shape-shifter and prophet.

Much of his story of self-exile and refusal to assimilate with the increasingly dominant Christian culture would be lost, and what remained of the legend would lay dormant for centuries, likely due to the Welsh oral tradition whereby little was written down. Then, after more than 500 years, his exploits captured the imagination of Geoffrey of Monmouth and his readers. He became larger than life, a magical literary figure separated from humanity, his prophetic and transmigrative abilities no longer a matter of belief, grounded in actual faith and ritual, but innate and unquestionable. A fantastical origin story was created to explain his powers, and the archetype was born. But what of Myrddin? What of the man who fled the battlefield, escaping to the forest, turning his back on wealth, kings, and worldly things?

Gastón and Jovita by Karl Schackne explores the legend of Merlin the bard and prophet, bound by faith and his druidic practice, imagining what happens to him after rebirth. As Gastón, he navigates the fringes of a crumbling society, marking time until his next trip to the Otherworld where a new and (hopefully) more rewarding incarnation awaits. Carrying both the wisdom and wear of many lifetimes, he finds new inspiration in a young protegé. Will Gastón rise to the occasion and become a mystic for a new age?

MERLIN by Karl Schackne
Directed by Alejandro Torres
Staged Reading on November 23, 2019 at The EXIT Theatre

Karl Schackne is an actor & playwright raised in the Bay Area. He lives in San Francisco with his wife and baby hobbit. This is his first time writing for SF Olympians. He started writing plays in his early-40s and finds the process both rewarding and torturous. He’s written for collaborative full-length productions with Wily West, and had short plays produced by the Playwrights’ Center of San Francisco, Seoul Players, & PianoFight.

Through acting Karl has gained invaluable insight into storytelling. Performing with Custom Made Theatre, Quantum Dragon, Left Coast Theatre Co., Those Women Productions, SF Olympians, Theatre Pub, and The Playwrights’ Center of San Francisco has given him an actor’s perspective on playwriting, while sparking a great passion for theatre.

Writing for SF Olympians has been on Karl’s mind for a few years. This year’s theme, and chosen subject in particular, grabbed his attention possibly because he likes Celtic rock, he’d been planning a visit to Wales, and Excalibur is one of his favorite movies. It also occurred to him that people still name their kids Merlin, which is pretty cool. Growing up, he watched Little House on the Praire which starred Merlin Olsen, who was also a great football player. Neither had anything to do with choosing to write a play about Merlin.

The image of Merlin was created by Donald Bolin.