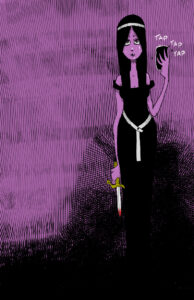 Morganna (aka Morgan le Fay, Morgaine, and/or Morgan) is a sorceress who figures prominently in Arthurian legend, most often characterized as Arthur’s sister. Morganna is possibly related to the Morrigan of Celtic mythology, a Triple Goddess of war, death, fertility and the prosperity of the land. Early writings describe Morganna as a witch, fairy, and enchantress who became Arthur’s guardian or guiding force. Over time, the character of Morganna developed into Arthur’s antagonist, his nemesis, ultimately causing Arthur’s downfall. More modern references see the pendulum swing back, portraying Morganna as a more benevolent figure and explore a more nuanced relationship with Arthur.

The first mention of Morganna occurs in Vita Merlini (1150) and describes her as an inhabitant of Avalon, the mystical island of apple trees where Merlin is carried before he dies. This account depicts her as a great healer. The early romantic novels of Chretien de Troyes (1170s-1180s) are the first to describe Morganna as Arthur’s sister, a compassionate enchantress with great healing power.

In Thomas Malory’s Morte d’Arthur (1485), one of the best-known works of Arthurian literature, Morganna is now represented as Arthur’s half-sister, the daughter of his mother Igraine and her first husband. Malory’s Morgan is a great sorceress and an apprentice to Merlin. She is hostile to Guinevere, due to her unrequited love for Lancelot. Malory also casts her as Arthur’s rival, coveting the throne, and indirectly causing his death.

In more modern retellings of the legend, particularly those of the 20th and 21st century, Morganna’s character is merged with her sister Morgause, mother to Mordred, and/or the villainous Lady of the Lake. This was an attempt to simplify the plotline, such as in the 1895 stage production of King Arthur by J. Comyn’s Carr, which was an international success and contained only five characters. Carr’s Morgan plots with her son Mordred to kill and usurp Arthur.

More modern references create new and entirely different versions of Morganna. The comic book world took Morganna to the extreme, creating a supervillainess in Stan Lee’s Morgan le Fay (1955), and in Jack Kirby’s Morgaine le Fey (1972). In Marion Zimmer Bradley’s novel Mists of Avalon (1983), Morganna evolves into a sympathetic, fully-dimensional character, the protagonist of the story. The sensitive portrayal of Bradley’s Morgaine remarkably inspired a neo-pagan revival for Morganna, as many religious groups have adopted her as a symbol of power. Susa Morgan Black, a worshipper of Morganna and leader of a religious group inspired by ancient Celtic culture, believes that Morganna is one of the oldest Celtic goddesses. Based on the fact that names and titles similar to “Morgan” appear across various Celtic literature, Black claims that Morganna is the “third aspect of the Sacred Triple Goddess, the essence of the powerful Crone, Warrioress, and Seductress.” Black praises Marion Zimmer Bradley for “rescuing” Morganna from patriarchal Christian perceptions.

In MORGANNA by Jessica Chisum: When the virtual otherworld of Camelot is overrun by medieval trolls, two young techie witches (or “twitches”) courageously venture into meatspace to find the IRL witches. When they find themselves at a neo-pagan convention in Avalon, Illinois, the trolls at the Holiday Inn are harder to avoid. A dramatic comedy with an ode to 80s horror flicks, MORGANNA investigates the “re-branding” of the sinister sister of King Arthur as a modern-day Goddess of Everything.

MORGANNA by Jessica Chisum
Directed by Megan Briggs
Staged Reading on November 21, 2019 at The EXIT Theatre

Jessica Chisum (playwright, MORGANNA) is an actor, playwright, teacher and voice over artist, currently living in Seattle. In San Francisco, her play PROMENADE was produced by Three Wise Monkeys, and PHOEBE PHOENIX SAVES THE WORLD was workshopped by FoolsFury. Both plays were selected to be performed at the Last Frontier Theatre Festival in Alaska. Her play THERE IS A LIGHT THAT NEVER GOES OUT premiered in San Francisco as part of THE MORRISSEY PLAYS produced by SF Theater Pub. Her latest play, GRIMOIRE, was produced in Seattle as part of 14/48 Projects’ World’s Quickest Theatre Festival. She was born and raised in Fairbanks, Alaska.

The image of Morganna was created by Cody A. Rishell.