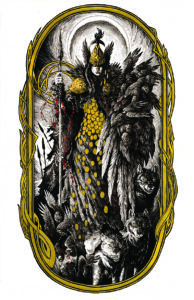 The Morrígan is an enigmatic figure out of Irish mythology, and often appears in Welsh myths. Her name might mean ‘nightmare’ and it might mean ‘queen;’ derivations are varied and lost. Her identity has been transposed over that of other fearsome figures; an analog is commonly found in Lilith. Morgan le Fey of Arthurian legend may have been inspired by our phantom queen. The Morrígan is difficult to quantify, and we mean that literally; she is described both as an individual and a triune goddess. She is heavily associated with ravens and other corvids, and is often described as wearing or having their feathers about her somehow.
She sometimes is betrothed to the Dagda and is mother of their daughter, Brígh. Meanwhile, she is also the lover of Cú Chulainn, though their affair is a bloody one. 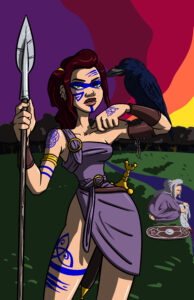 She is described as the mother of the battlefield, and is regarded across bodies of myth as a goddess of fate and death. The Morrígan is a beguiling and versatile subject for writers because of these ambiguities and half-formed identities. We have a lot of wingspan to work with here.

MORRIGAN by John Elison and Meg Elison
Directed by Siobhan Doherty
Staged Reading on November 16, 2019 at The EXIT Theatre