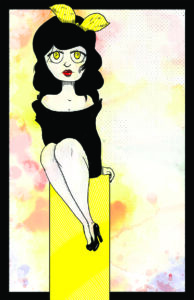 Rosmerta was a Gaulish goddess of Fortune and Bounty. On the Western European continent, she was worshipped and praised for her beneficence. Rosmerta was often pictured as the wife of the god Mercury, but she was a power in her own right. She is depicted with either a cornucopia or butter-churn. She was the divine light of prosperity, wealth and fertility. Rosmerta also presided over the bees, beehives and honey and was considered to be the goddess to approach with prayer when you wanted your brewing blessed. Some of you may have read works by J.K. Rowling with a character Rosmerta mentioned in them. Obviously this is a nod to the Goddess of the same name, as she is a witch depicted in the Tavern  of the 3 Broomsticks. However, the goddess herself, as the capricious Goddess of Fortune, may have been fickle but never served evil.  Carvings of her still endure all along the Rhine, thousands of years later.

Tessa was conceived on a Friday the 13th, and entered this world in the midnight hour in shadow of the Green Giant. Her parents despaired of her eccentricities. The year she ate only white bread and butter caused them much grief. However, Tessa proved herself a gifted child. She excelled at pixie and fairy architecture and showed talent with a Ouija board at a young age.  Tiring of these early pursuits, and possessed of a restless spirit, (figuratively snd literally)she studied Shakespearean theatre. Writing soothes the savage beast in her heart, and she prays her small shadows entertain you.

The image of Rosmerta was created by Cody A. Rishell.