At some point in the 8th century, a series of stories from Persia and South Asia that had been passed down orally for generations were compiled into a Persian collection titled Hazar Afsan (the One Thousand Stories). This is the first known version of what has come to be known as The Thousand and One Nights. Probably. These stories were translated into Arabic, added to by Syrians, Egyptians, and Iraqis during the Islamic Golden Age, and assembled into a collection called the Alf Layla wa-layla. Being as there are no surviving manuscripts of Hazar Afsan, just the references to the stories from 10th century Arabic historians, the Arabic text versions of the tales are the earliest manuscripts we have. By the 9th century these were well known and widely circulated, and it is from them that French orientalist scholar, Antoine Galland, produced the first translation for a European audience in 1704. In his twelve-volume work, Les Mille et une nuits, contes arabes traduits en français, Galland took a lot of liberties with the Arabic text — including new stories, and censoring much of the erotic content.

In 1705, the first English collection, the Arabian Nights’ Entertainments, was translated from Galland’s French version. It became immediately popular, capturing the public imagination such that it was in its eighth edition by 1736. The tales were serialized in the Parker’s Penny Post mid-1720s, bringing them into the homes of British families. The popularity of the tales may be attributed to the fact that they provided an ‘other’ for the British to compare their freedoms in relation to – Tartars, Persians, Indians, and various Muslim peoples of the western imagination — at a time of great political transformation in Great Britain during the Industrial Revolution.

The first English translations of the ‘original’ Arabic text were by Edward Lane (1840, 1859), John Payne (1882), and Sir Richard Francis Burton (1885). These colonial era interpretations of the text were very much a product of Orientalist adaptation. As such, they reflect the paradox of the Victorian rejection of eroticisim and sexuality on the one hand, and the Victorian obsession with cataloguing and discussing sexual acts deemed ‘aberrant’ to the point of titillation, on the other. This is characteristic of Sir Richard Burton’s translation, which emphasized the stories’ Arab origin, and included his own detailed commentary on ‘Arab sexual practices’ such as sodomy, eunuchism, clitoridectomy, miscegenation, and bestiality. In one commentary, he notes Arab women’s lust for black men due to the size of their sexual organs. His commitment to a quasi-anthroplogical quest into the Arab world was such that he had himself circumcized so he could go in disguise as a Muslim to pilgrimage at Mecca. Burton’s translation disrupted the previous English cultural presentation of the Arabian Nights — which in some circles has been adopted as a British children’s tale — to such an extent that it was branded “pornographic” and sparked the first public literary debate in Britain about pornography.

The socio-politics of translation aside, the allure of the tales and their continued relevance and appeal over a millennium comes from the universality of its themes and its celebration of the power of language and storytelling,  which have inspired countless storytellers from Shakespeare and Dickens to Proust. Thirteen hundred years after its initial compilation, The Thousand and One Nights is a global literary project, which continues to serve as a gateway to the cultures of the east for western audiences, a work that affirms the world’s medieval eastern cultures as a common global inheritance.

Common throughout all of the versions of The Thousand and One Nights is the central framing tale of Sheherazad and Shahryar. As the protagonist of the tales, the main character in the framing device, and the main storyteller, Sheherazade is our guide into the tales and the west’s gateway into the orient. At the beginning of the stories we learn that the discovery of King Shahriyar’s wife’s infidelity has driven him to conscripts the realm’s virgins to his marital bed only to kill them before the night is done, before they have a chance to cuckold him like his deceased wife (his first victim). This killing spree goes on until his Vizier’s daughter Sheherazad, the heroine of the Thousand and One Night’s framing story, presents herself as his sacrificial bride. A highly intelligent and wily young woman she conspires to save herself by telling riveting stories (1000 of them), which she always stops in the middle at dawn, buying herself one more day of life while the king goes out to perform his duties. She stops her stories on the 1001st night when the King, having fallen in love with her, decides to spare her life.

Over the centuries, the character of Scheherazade has come into focus through a western lens, one which displayed her as a symbol of Middle Eastern womanhood. Yet while she is presented as an erstwhile victim, subject to a man’s whims in a society where she has no rights, she is also celebrated as well-read of poetry and history, philosophy, science, and art, and knowledgeable about past rulers, which presumably comes in handy in her predicament. Indeed, the story does not set up Sheherazad’s sexuality as her weapon, but rather her knowledge and wits as a storyteller that ultimately save her life.

The adaptation of Sheherazad’s story for this year’s Olympians Festival follows in that tradition, bringing her into the modern day context of fraught relations between the west and the east, characterized by globalization, the ‘war on terror’, and debates about immigration — themes that can draw from the countless colorful tales in the original version given its references to shape shifting, border crossings, villains, heroes, wily viziers, women battling for survival in a world dominated by men. In the tales themselves, there is a celebration of difference, of attraction between opposing forces and characters from disparate worlds, and so perhaps there is a lesson there for making sense of the contemporary ‘clash of civilizations’ paradigm.

Our play centers on Sharz, an Iraqi-American prostitute in Nevada City, USA, who is visited one night by a deranged former US serviceman, a veteran of Middle Eastern wars who is bent on a killing spree. Sharz keeps the soldier up all night telling him stories about her previous encounters with customers to keep him from committing an atrocious act of violence. As she titillates and entertains the young man, Sharz gives him a period of much-needed solace. The story of Sharz continues the original tales’ theme of womens’ battle for survival in a world dominated by men. But it explores how a world dominated by men oppresses men as much as it does women and gender non-conforming individuals. We see this in the character of a soldier clearly, someone whose life has been given over to violence, and whose body and spirit suffer untold trauma as a result. Through her stories, Sharz teaches the soldier and the audience about the power of redemption, about the broken spirit in all human beings, and about the inevitable fact of human connection across imagined differences. Like Sheherazad, in each story she tells, Sharz makes her case for her life as well as his. 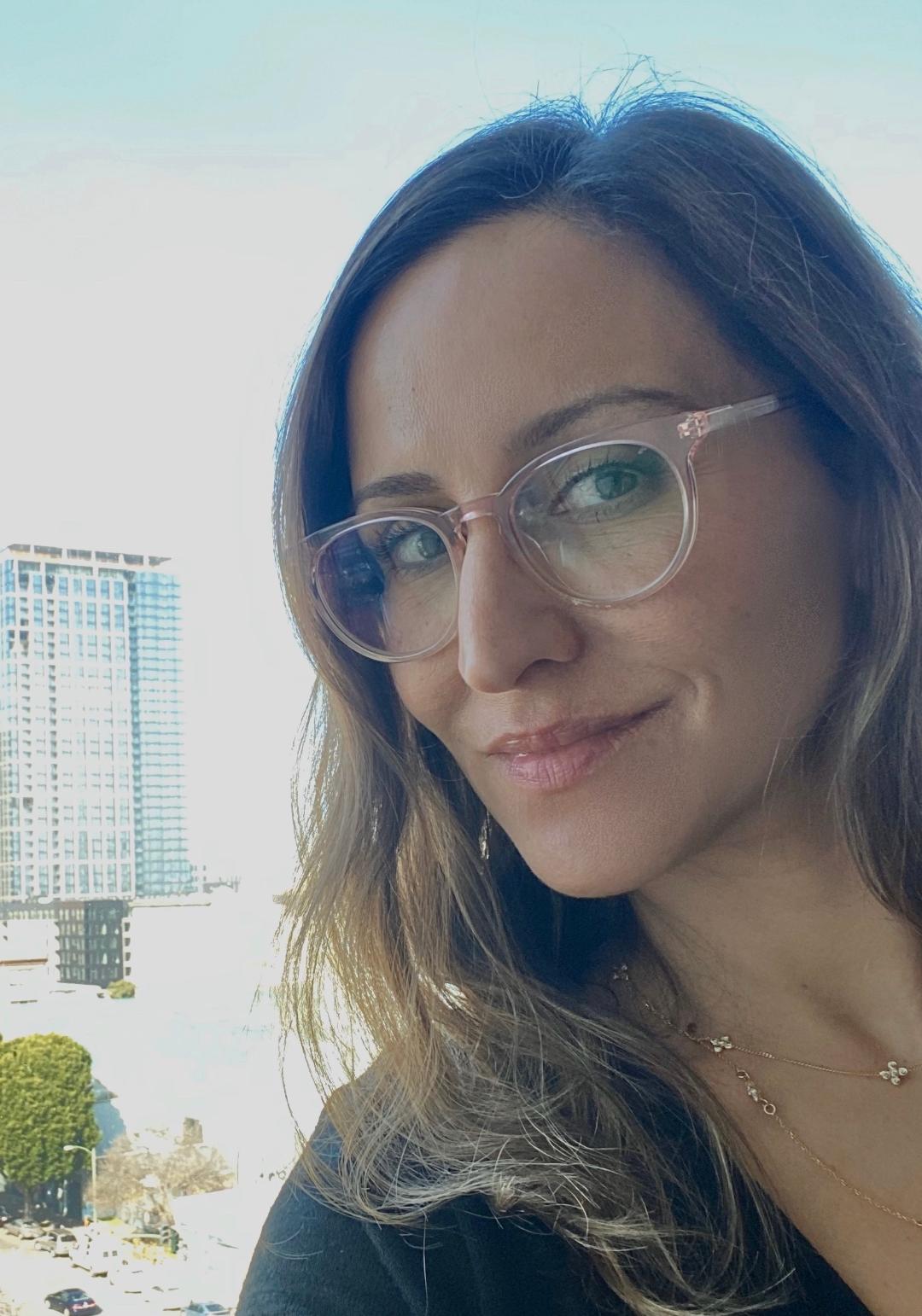 Naseem Badie has been a visual artist, a filmmaker, a performer, a professor, and an author. Her playwriting credits include Seek the Water, which was selected for the New Works program at Custom Made Theater, and the Playwrights’ Center of San Francisco reading series, and Written in the Stars, a collaboration with Edward Morgan, which was performed at the 2019 SF Olympians Festival. She has just finished work on This People’s History of the Twentieth Century, a collaborative play with nine other Bay Area playwrights, which will premier in July 2020 at the Exit Theater.  She is currently working on a YA fantasy novel, and spends her days in the research unit of the Alameda County Probation Department. She holds a BA from UC Berkeley, a BFA from San Francisco Art Institute, and MPhil + DPhil degrees from Oxford University. She is a native of Iran, and grew up in Germany and California.