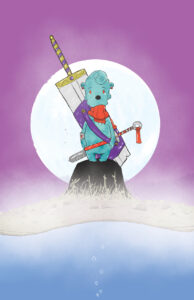 Sir Bedivere is one of the oldest characters in the Arthurian canon. His earliest appearance is in the Welsh tradition as Sir Bedywr Bedrydant, one of the six knights tasked by Arthur to join Chulwich’s quest to free Mabon ap Modron and win the hand of Olwen in one of the longest tales of The Mabinogion. His epithet, Bedrydant, translates to “of the perfect sinews,” perhaps an intentionally ironic title as Bedwyr’s most notable physical characteristic is his missing hand. In spite of this seeming disadvantage, Bedwyr is always ranked as one of Arthur’s most formidable and decorated warriors, his weapon of choice a spear with which one thrust delivers the damage of nine. He is also considered the “handsomest” knight, save Arthur and the lost-to-time Sir Drych.

In the early traditions, Bedivere is usually found paired with Sir Kay (or Kai), Arthur’s sometimes foster-brother. The two quest and fight together, sometimes also joined by Arthur’s hound, Cavall. Later, Bedivere and Kay are joined by Sir Lucan, often named as Bedivere’s brother, and they are listed as the first three men to whom Arthur grants knighthood after his coronation. They are also three knights who almost always hold particular honors within the governance of Camelot: Kay as the Seneschal, Bedivere as the Marshal, and Lucan as the Butler.

With the appearance of Sir Lancelot in the later French and Romantic traditions, Bedivere becomes a less prominent figure, his prowess as a warrior and position of trust and closeness to Arthur often being applied to the newcomer Lancelot instead. With this evolution of the roster of knights, Bedivere sometimes is attributed instead with a more intellectual roll. Here he becomes more of an advisor figure to Arthur, a man of great wisdom or problem-solving (later to be lampooned, or course, by Monty Python).

However, Sir Bedivere’s most enduring role in the Arthurian tradition is as the last loyal knight standing after the Battle of Camlann, tasked by a dying Arthur with returning the sword Excalibur to the lake from whence it was received. Many versions of this event have a clear Christian influence, with Bedivere twice failing in his task, only to be admonished by Arthur, before finally casting the sword away and seeing the hand of the Lady of the Lake reach up to receive it and draw it into the water. This parallel to the Biblical story of Peter’s denial of Jesus before the crucifixion aligns with the Matter of Britain, a tradition in which a messianic Arthur will rise again in Britain’s hour of greatest need.

Alandra Hileman’s Eich Dyn is a spotlight on Bedivere, alone at (almost) the end of the world, grappling with what it means that the first one to kneel for knighthood is now the last knight left standing to tell the tale. At the edge of the lake, Excalibur in hand, Bedivere reflects on what the Legend of King Arthur will become, what responsibility the last one standing really has to tell the tale, and whether this is the end, or really the beginning.

The image of Sir Bedivere was created by Cody A. Rishell.