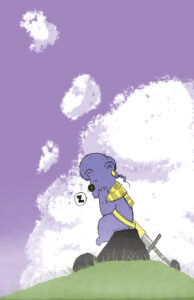 Gareth is the youngest of the Orkney princes, King Arthur’s nephews, and half-siblings to Mordred. He begins his adventures disguised as a kitchen boy in Arthur’s court, suffering the taunts of Sir Kay, but being treated kindly by Sir Lancelot. The main part of Gareth’s story concerns his rescue of the captive lady Lyonesse from the clutches of the Red Knight of the Red Lands. Along the way, he battles and overcomes the Black Knight, the Green Knight, the “Puce” Knight, and the Indigo Knight. On his return to Camelot, he competes in a tournament, still in disguise, eventually being recognised after defeating his eldest brother, Gawain. He meets his end at the hands of his dear friend Sir Lancelot during that knight’s rescue of Guinevere. His death is the final straw for Gawain, who then insists that King Arthur go to war with Lancelot, which results in the break-up of the Round Table and Arthur’s defeat at the  Battle of Camlann.

To me, Gareth has always seemed such a pathetic figure. Of his brothers, he is the least offensive, and arguably closest to the chivalric ideal. However, he gets killed off, unarmed, by his best friend at King Arthur’s court. My play features another character named Gareth who, however much he means well and tries to do the right thing, always ends up causing a disaster. An unlikely anti-hero who must battle time-traveling villains from the distant future, Gareth is aided by the Middle-Age knight Chermondsley and his horse Hrothgar, and also by the Buddha. 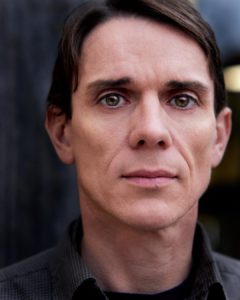 ALAN COYNE is an Irish-born actor, improviser, clown, and playwright. He has previously worked with the SF Shakespeare Festival, Livermore Shakespeare Festival, We Players, Custom Made, Bay Area Children’s Theater, Theatre of Yugen, Indra’s Net, and Lafayette Town Hall Theater. He has written for the sketch comedy groups The Last Laugh SF and Group Hug, improvised with Pan Theater’s Awkward Face, and sings with the a cappella group Spot the Octopus. This is his sixth SF Olympians Festival, and his fourth as a writer. This summer, he & Adrian Deane are taking his two-person adaptation of Twelfth Night (2ELFth Night) to the Edinburgh Festival Fringe.

The image of Sir Gareth was created by Cody A. Rishell.