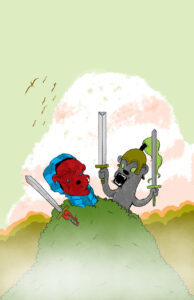 Sir Gawain (or Gawaine, or Gawan) is one of the most popular figures in the Arthurian tradition, appearing as the protagonist of more classic romances that any of the other Knights of Round Table. Gawain is usually presented a son of King Lot of Orkney and Queen Morgause, making him nephew to Arthur, and often half-brother to Mordred. This familial tie gives him a role of prominence in the court, as well as a ringside seat for the events which lead to the downfall of Camelot.

Gawain can be found throughout the Arthurian tradition as a relation of Arthur and an often surly warrior of great skill under a variety of names: Gwalchmei in The Mabinogion, Walwen in the Gesta regum Angelorum, and Gualganus in the Historium Regum Britanniae. However, the most pervasive characterization of Gawain comes from the works of Chrétien de Troyes and other French romantic traditions. This is where he evolves from somewhat of a thug into the embodiment of the chivalric virtues, known for his courtly care and protection of distressed damsels. Out of this tradition come his two titular adventures, Sir Gawain and the Green Knight and The Wedding of Sir Gawain and Dame Ragnell, as well as myriad other epic tails in which Gawain is a strong supporting character to whomever the protagonist-knight may be.

Sir Gawain is in many ways the most “average” of all Arthur’s knights. He is too secular and worldly to ever proceed very far on any of the Holy Grail quests, and he is not an outstanding warrior or possessing of any supernatural skill either. His role amongst the company of knights is often that of a supporter or even a “fixer” of sorts – completing a quest through chivalry that another knight has failed through brutishness, or through courtesy repairing the damage done by another’s arrogance. Unlike many of the other mystically-endowed knights, Gawain either succeeds or fails through his own very human nature. This may explain some of his prominence as a figure, as his humanity makes him an achievable role model for the courtly virtues, at least by general mythic standards. Gawain’s quests are also heavily imbued with symbolism and metaphoric imagery, and often feature a damsel, though she is not always as distressed as she seems, such as in the knight’s most famous outing, Sir Gawain and the Green Knight.

In the original Middle English poem, a mysterious green knight appears in Arthur’s court and challenges any knight who dares to strike him with an axe, provided that the Green Knight may himself return the blow in a year and a day. Gawain accepts the challenge and cuts of the challenger’s head, only for the Green Knight to rise, pick up his head and remind Gawain of the terms of the challenge. A year later, the dutiful Gawain sets off to find the “Green Chapel” and keep his side of the challenge. On the way, he comes to stay at the castle of Lord and Lady Bertilak, where a game of exchanges and the promise of a magic girdle test his resolve, loyalty, and honesty. The symbolism of the green knight, the knotted girdle, and the pentangle (representing an unknotted cord) are often ascribed to Gawain because of this tale.

Alandra Hileman’s Sir Gawain, or Dénouement is a contemporary riff on the knight’s most famous outing. When a dinner party with his kinky married friends includes an unexpected proposition, our hapless hero is caught between loyalties. Is it true that what you don’t know can’t hurt you? What does modern chivalry really mean? And will the party end with naughty nights, or knotty knights?

SIR GAWAIN or DENOUMENT by Alandra Hileman
Directed by Nara Dahlbacka
Staged Reading on November 20, 2019 at The EXIT Theatre

The image of Sir Gawain was created by Cody A. Rishell.