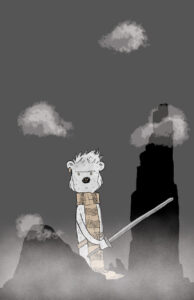 The key to romance is the projection of that we would like to believe, but know perfectly well in our hearts is not true.” –WRJ Barron, Arthurian scholar and literary historianSir Kay is one of the oldest figures attached to the King Arthur legend. A Welsh bardic poem from around the 6th century names the hero “Cai” as Arthur’s principal follower and right-hand man. He is described as having superhuman capacity as a drinker, the ability to hold his breath underwater for nine days, and great prowess in slaying monsters and witches. He also has a sharp tongue and an explosive temper, as is often the way with Celtic heroes. The name itself may be an abbreviation of the Roman “Caius,” possibly reflecting Arthur’s quasi-historical roots as a Romano-British battle leader.In later retellings, however, Sir Kay is supplanted by a series of other characters: from Geoffrey of Monmouth onwards, Gawain, Lancelot, and Galahad usurp his position as the most important of Arthur’s knights. As each new hero comes to the fore, Kay’s powers are reduced, until he becomes the seneschal, or steward, a Malvolio-like figure treated with scorn by the rest of the Round Table. In one episode, Lancelot switches armour with him so that other knights, thinking he is the hapless Kay, will dare to fight him again. While he still features early in the story as Arthur’s elder foster brother, Kay eventually disappears altogether, irrelevant and forgotten.SIR KAY is about two forgotten, irrelevant people: Keane and Doyle, an erstwhile vaudeville comic double act who lie somewhere on the spectrum between Laurel & Hardy and Vladimir & Estragon. Though time has moved on and forgotten them, Keane and Doyle still remember the good old days when the music halls resounded with praise for two old campaigners at the top of their game.

ALAN COYNE is an Irish-born actor, improviser, clown, and playwright. He has previously worked throughout the Bay Area, with such companies as the SF Shakespeare Festival, Livermore Shakespeare Festival, We Players, Custom Made, Bay Area Children’s Theater, Theatre of Yugen, Indra’s Net, and Lafayette Town Hall Theater. He has written for the sketch comedy groups The Last Laugh SF and Group Hug, and improvised with Pan Theater’s Awkward Face. This is his sixth SF Olympians Festival, and his fourth as a writer.

The image of Sir Kay was created by Cody A. Rishell.