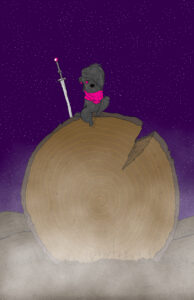 Of all the noble Knights of the Round Table, Sir Mordred stands out as ignoble, the traitorous bastard son of King Arthur and his half-sister who fatally wounds his father in the Battle of Camlann before dying himself. That’s how we know him today. But it didn’t have to be this way. Like a baby born as a tabula rasa, he entered the literary canon with no inherent morality, and it was centuries of authorial parenting that made him the villain we love to hate.

Mordred first appears in the 10th century Welsh text Annales Cambriae, which mentions the Strife of Camlann “in which Arthur and Medraut fell.” Notably, there are no details about what the battle was about, no indication of what their relationship was, and, in fact, no clarification as to what side each was on. The name Medraut was possibly derived from the Latin moderatus, for “moderate.” The original conception of Mordred was completely neutral with no value judgment. The later Welsh text The Dream of Rhonabwy continues this neutrality but makes Medrawd Arthur’s nephew and foster son who went to battle because a messenger named Iddawg misrepresented Arthur’s pleas for peace to provoke the war he wanted. Welsh poets Meilyr Brydydd and Gwalchmai ap Meilyr describe Mordred positively, and it’s possible the character could have moved even further into that light. But then in the 12th century, British writer Geoffrey Monmouth publishes Historia Regum Britanniae, which describes Modredus as a traitor—but not Arthur’s son—who marries Guinevere and seizes the throne, which leads to the battle between Arthur and Modredus that ends at Camlann. The French finally bestow upon him the name Mordred in the Vulgate Cycle and in Mort Artu add Arthur’s parentage with the incest element (but offer conflicting accounts, one accidental and one deliberate, where Arthur knowingly tricks his sister into thinking he’s her husband). In the Post-Vulgate Estoire de Merlin, Arthur, having been told by Merlin that his son will kill him, sends away all babies born on Mordred’s birthday on a ship. All the babies die but Mordred. Despite these new additions, the Middle English alliterative poem Morte Arthure makes a play to once again portray Mordred sympathetically. He is still the villain he’d been fashioned as, but he cries about killing Sir Gawain and repents his misdeeds. Alas, English writer Thomas Malory has other ideas. He publishes Le Morte d’Arthur in 1485 and really turns Mordred into a bastard (figuratively, not just literally). Here he’s a rapist and a murderer, stabbing knights and trying to take over Camelot, with no sign of remorse. Here he is killed by his own father at the Battle of Camlann, but not before fatally wounding him. The moderate Medraut has become the villainous Mordred. (Belgian writer Jean d’Outremeuse tells a slightly different story in Ly Myreur des Histors where Mordred survives the battle and rules with a traitorous Guinevere until Lancelot defeats them, kills Guinevere, and then entombs Mordred with her. Then Mordred eats Guinevere’s body before dying. It’s not enough to make him a rapist and a murderer, now he is also a cannibal.)

This narrative of narratives presents only a small sampling of the number of conflicting accounts of Mordred’s story. Though the details may vary, the record strongly suggests that Mordred was not created to be an unrepentant scoundrel. The Welsh treated him well. What could he have become if the English and French had not adopted him? He is a character who could have gone down a different path if outside forces hadn’t pushed him into a role he finally had to embrace.

In Sunil Patel’s Sir Mordred, we see two versions of Mordred’s story that begin identically but quickly diverge because of outside forces pushing him in opposing directions—namely, patriarchal masculinity and compassionate masculinity. In one thread, the conquering warrior side of Arthur dominates as he teaches his son how to be a Real Man, which inevitably leads to the bloody fate sealed in stories for centuries. But another thread presents an alternative as the gentle, noble king raises his son to be a real man, emotionally mature and able to solve problems without violence. Guinevere views both these threads from within and without, asking the audience to consider what path we are on now and whether we can change.

Sunil Patel is a Bay Area fiction writer and playwright who has written about everything from ghostly cows to talking beer. His plays have been performed at San Francisco Theater Pub, Pint Sized Plays, Shotz, and PianoFight’s ShortLived. This is his third time writing for the San Francisco Olympians Festival after The Bow (2013) and Galene (2015). His fiction has appeared or is forthcoming in Flash Fiction Online, The Book Smugglers, Asimov’s Science Fiction, and Lightspeed, among others. Plus he has reviewed books and TV for Lightspeed and edited fiction for Mothership Zeta. His favorite things to consume include nachos, milkshakes, and narrative. Find out more at ghostwritingcow.com.

The image of Sir Mordred was created by Cody A. Rishell.