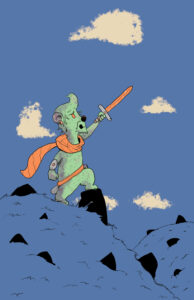 PELLINORE, aka “Pelly,” aka “The Thirsty One,” aka “Failure” was a Knight of the Round Table who was known for his never-ending hunt for the Questing Beast. The Questing Beast was a monster, part snake, part leopard, part lion, part stag – or the Beast was a figment. Pelly was cursed with madness or Pellinore was destined to an impossible quest. Either way, Pellinore was always one step behind the thing he most wanted in the world and he never ever found it. He was either the greatest knight for never ever giving up, or the very worst one for not knowing when to put down his sword. It depends on whether you believe a questing beast is real, or whether you already know there is one standing right behind you.

Of their play about Sir Pellinore, Carson Beker writes: It’s team building Happy Hour! We’re all wearing animal onesies! It’s all Awesome! And Scalable! And Productive! Except, well, Zebra’s late again, Marketing Department is Using New Lenses and there have been a bunch of layoffs, there are rumors of a buyout, Lion’s been in a terrible mood lately and now Zebra’s best friend is trying to crash the party dressed totally inappropriately because he’s  a … he’s a… wait, what’s a Questing Beast?

SIR PELLINORE or GOOD NIGHT SAN FRANCISCO, THE ANIMALS HAVE ARRIVED by Carson Beker
Directed by Nara Dahlbacka
Staged Reading on November 20, 2019 at The EXIT Theatre

CARSON ASH BEKER, aka, “The Hyperbolic,” writes plays, tells stories, and gathers people around tables. They are the co-founder of the Pirate Art School The Escapery, and co-founder of Queer Cat Productions, an immersive theater outfit. Their words have appeared or are forthcoming in The Fairy Tale Review, Cutthroat, Spunk, Foglifter, Gigantic Sequins, Utterance, and Radar Literary Series. Their plays have been produced or in development through 3Girls Theatre, Custom Made Theater, Exit Theater, and Z-Space. They are a Lambda Emerging Writer Fellow in Fiction, a Tin House Scholar, and a member of Clarion West 2018. They can be found at CarsonBeker.com, QueerCatProductions.com, and www.Escapery.org. Someday they will rest. Until then, they chase the questioning beast.

The image of Sir Pellinore was created by Cody A. Rishell.