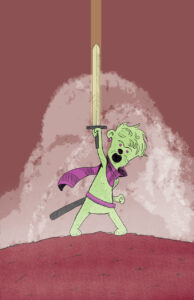 Sir Percival is the great “also-ran” of Arthurian legend: his claim to fame is that he got really close to finding the Holy Grail, but ultimately failed in the quest. (The honor of finding and recovering the Grail went to Sir Galahad.) As with all Arthurian legends, different chroniclers have written different variations of his story, but a basic version might go something like this:

Percival was brought up by his mother in a forest, ignorant of the ways of arms and chivalry. When he was a teenager, a party of Round Table knights passed through the forest, and Percival begged to be allowed to join them. He went off to Camelot and became a knight of King Arthur’s court. While journeying around England on the Grail Quest, Percival came upon the castle of Corbenic, presided over by the Fisher King, who suffered from an un-healable wound in his thigh. (Note that in French, “pecheur” means both fisher and sinner.) That night, Percival witnessed the King’s attendants engage in an elaborate procession of mystical objects, including a bleeding lance and a golden grail. Percival was very curious about the meaning of this procession but, having been taught that it’s rude to ask too many questions, remained silent. The next morning, Percival learned that the Fisher King’s grail was indeed the Holy Grail, and if that he had only asked about its purpose, he would have healed the king’s wound. Much later and after much adventuring, Percival was able to lead two other knights, Sir Bors and Sir Galahad, back to Corbenic Castle. Galahad, being the holiest and purest of all King Arthur’s knights, finally succeeded in obtaining the Grail.

Of her play about Sir Percival, Marissa Skudlarek writes, “I didn’t know much about Sir Percival before this year’s Olympians Festival, and at first, I didn’t think his story would resonate with me. I enjoy writing smart, neurotic, over-thinky characters, but Percival is often portrayed as a naïve simpleton. However, when I read the bit where Percival fails to recover the Holy Grail because he’s been told that it’s rude to ask questions, something clicked with me. I think many people, particularly women, can relate to the idea of failing to achieve a long-held dream because they are afraid of being perceived as nosy, or ignorant, or rude.”

The image of Sir Percival was created by Cody A. Rishell.