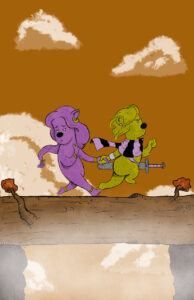 Sir Tristram is best known for his tragic romance with Iseult, such that we are more likely to think of him as a lovelorn swain than a valiant Knight of the Round Table. As with all Arthurian legends, different chroniclers have written different variations of his story, but a basic version might go something like this:

Tristram, the nephew of King Mark of Cornwall, went on a diplomatic mission to Ireland in order to bring back his uncle’s fiancée, Princess Iseult. Among the treasures of Iseult’s dowry was a powerful love potion, intended for her and Mark to drink on their wedding night. Unfortunately, while sailing back to Cornwall, Tristram and Iseult accidentally drank the potion, and from then on they were besotted with one another. Once she arrived at King Mark’s palace, Iseult did everything she could to avoid her new husband and sneak off to be with Tristram. The two lovers were nearly caught several times and Iseult was even subjected to a trial by ordeal for adultery, but for a while, they always managed to talk their way out of it. Finally, though, Mark caught his nephew and his wife in flagrante and banished Tristram to Brittany. There, Tristram married another beautiful young lady who also happened to be named Iseult (one could say that he had a type). He also engaged in knightly adventures, and during the course of one, was struck with a poisoned lance. On his deathbed, he begged for Iseult to be brought to him from Cornwall, asking that her ship raise white sails if she was on board, and black sails if not. When the ship sailed into Brittany harbor, Tristram’s jealous wife (the “other” Iseult) lied to him about the color of the sails, and he died of grief. Isolde ran off the ship and rushed to his bedside, whereupon she also died of a broken heart.

If the Tristram-Iseult-Mark love triangle seems to echo the even more famous Lancelot-Guinevere-Arthur love triangle, scholars of medieval literature have determined that the Tristram story is actually the older one, and likely influenced the French courtly romance authors who developed the Lancelot narrative.

Of her play about Sir Tristram, Marissa Skudlarek says “The Tristram and Iseult legend features many compelling scenes and vivid images, but the part that has long obsessed me is that this all-time tragic romance happened involuntarily, due to an accidentally ingested love potion. This idea also seems to have special resonance in an era when it’s fashionable to proclaim that ‘love is just brain chemistry’ and many people regularly take drugs that alter their neurotransmitters. If a drug were invented that caused you to fall in passionate, long-lasting love with the first person you saw after taking it, would this be good or bad for society? Would it lead to a breakup-free romantic utopia—or would there be unintended and tragic consequences, just as there are for Tristram?”

SIR TRISTRAM or TRISTAN AND IZZIE by Marissa Skudlarek
Directed by Nara Dahlbacka
Staged Reading on November 20, 2019 at The EXIT Theatre

The image of Sir Tristram was created by Cody A. Rishell.