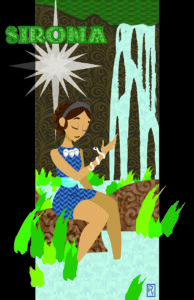 Sirona is a goddess of healing waters from East Central Gaul. Dedications and statues in her honor have been found throughout modern day France, Germany, and Hungary. Her temples were constructed around thermal springs or wells, hence her healing waters association. For the people who worshipped her, the springs represented renewal and regeneration. She is often depicted with a snake wrapped around her arm and a bowl of three eggs in the other hand, both symbols of fertility and healing. In some depictions, the diadem of stars around her head refers to her name, which means “stellar” or “astral”. Due to the numerous references to her found across a wide breadth of continental Europe, Sirona is regarded as a popular Celtic goddess. However, there’s not much information available for Sirona after the Roman occupation of Gaul and the association with Roman goddess Diana. This lesser known yet metaphorically rich goddess lends herself perfectly to interpretation for a modern world.

Of her short play about Sirona, Eteya Trinidad writes: “In my short play, I hope to explore Sirona’s healing side in terms of sexual trauma. With the Kavanaugh hearings, #MeToo movement, and our current president, sexual abuse has been extremely present in the news cycle. The media’s main approach has been to vilify the accused (not undeservedly), but what seems to be missing in the mainstream discussion is how to be kind to survivors. With Sirona’s guidance, I hope to imagine an intimate moment between two people in which compassion shines through.  Sirona lends herself perfectly to this mission – in my reading, her care for the womb doesn’t end or begin with pregnancy. Her cleansing energy extends to all concerns of sexual and reproductive health. For our protagonist, the ghosts of her past threaten her well-being and her romantic relationship. Sirona is the goddess to call for some radical, beautiful, ~Sexual Healing.~

Also, I look forward to interpreting Sirona’s healing springs as lube for all our enjoyment.”

SIRONA or SIRONA SLICK by Eteya Trinidad
Directed by Sophia Mia DiPaola
Staged Reading on November 9, 2019 at The EXIT Theatre

Eteya Trinidad (she/her/hers) is a stage manager, theatrical designer and playwright. She discovered her love for writing when she wrote and directed her first full length, La Mestiza’s Colors, with the College Players at the University of San Francisco. More recently, her short play, The Tenderloin Witch, was workshopped at 3Girl Theatre’s New Works Festival. Local companies she’s worked with include San Francisco Playhouse, the Playwrights Foundation, Cutting Ball Theater, Theatre of Yugen, Brava Theater Center, and BATS Improv. Eteya considers San Francisco her second home, her first being in Humboldt County of Northern California. She dreams of living in a cottage-by-the-sea, drinking tea, and adopting a black cat named Nyx.

The image of Sirona was created by Rachel Vanderpool.