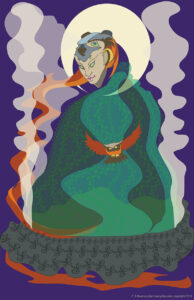 Fountain of youth? How about fountain of truth? Sulevia(e) is an ancient Celtic goddess—or occasionally a trio of goddesses, depending on the geographical lore—whose domain spans from hot springs to motherhood to law and honesty. Her unusual name is typically interpreted to mean “those who govern well” or “good rulers,” drawing deep from roots in the Welsh language, which makes sense as she was worshipped in Britain, Gaul, and Galicia. Often depicted in bas-reliefs wearing a bear head and with her feet upon an owl, there is considerable evidence that Suleviae was a precursor to the Roman goddess originally dubbed Sul Minerva.

While Suleviae’s position as one of the Gallic Deae-Matres (Divine-Mothers) is hotly contested, most sources agree that there have nonetheless been many inscribed monuments and altars that elevate Suleviae’s goddesshood amongst the other immortal beings. One of her designated worship sites, famous for healing rites and rituals, boasted sacred hot springs with eternally hot waters. It is said that Prince Bladud was such a fan of the springs (which supposedly cured his leprosy) that he built a shrine devoted to Suleviae in the city we now know as Bath, Somerset.

Of her play about Suleviae, Jeanie Ngo writes, “To be a writer is to be a liar. I’ve cherished big and small lies my entire life, discovering how they can embellish a story, get you out of trouble, or avoid hurting someone’s feelings. I approached Suleviae with the deliberate approach of turning her powers of truthfulness into her greatest detriment—after all, modern society is built on being polite and telling little lies to keep everyone safe and comfortable and happy. It would be, frankly, a total nightmare for me to have to go about my daily life whilst being completely honest to every single person I encountered. Sully, however, grows up thinking she is truly blessed with honesty, an advantage that will surely benefit her future law career. To me, Sully’s “gift” is undeniably a curse meant to torment her entire existence, eternally haunting her choices until she grows up to be an embittered, semi-secluded mess of a goddess.”

Jeanie Ngo is a San Francisco writer whose plays have been produced in SFSU’s Shotgun Festival and Spring Fringe Festival, SF Olympians Festivals VII and VIII at Exit Theatre, and Pint Sized, Music/Scene, Mixtape, and ShortLived VII at PianoFight. Her short story “Running, Running, Running” was published in the literary magazine Transfer 109, and her poetry has been featured at the Abrams Claghorn Gallery. She has also published two novels and has written a Vietnamese Christmas musical produced by Asia Entertainment. And if you wanted to know even more, you can keep up-to-date with her many writing shenanigans at jeaniengo.com.

The image of Suleviae was created by Christopher S. Bauman.