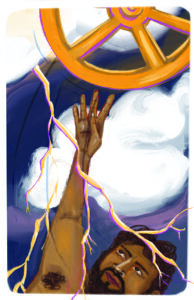 Relatively speaking there has not been very much written about Taranis – but what is written shows how powerful, important, and awe-inspiring he is. What else to say about a god that controls the sky, and thunderstorms, and fire, and maybe also the wheel, and for whom human sacrifices were commonplace? Taranis, whose name translates to “thunder”, is the Celtic equivalent to the Roman god Jupiter, and the likely reason so little is written about him is because, as they did with many other Celtic deities, the Romans did their best to replace him with their version everywhere they could. Worth noting – it is also possible that the reverse is true, that the Celts made all their gods look like Roman gods and Jupiter was just the closest thing to a “thunder” god the Romans have, because although he is high status Taranis is not the most important Celtic god like Jupiter is to the Romans.

There is a lot Taranis and Jupiter have in common – both are noisy, thunderbolt-striking muscle daddies with a penchant for arson. The only way you can tell them apart visually is that Taranis carries around what is called the “solar wheel” – an object which mythology experts say proves his high status in Celtic mythology, because it shows up on a lot of Celtic artifacts. The wheel is not just a symbol, though. It is thought to be practical – Taranis creates the noise for thunder by hurling it through the clouds.The Encyclopedia Britannica’s entry on Taranis says “[h]e was sometimes shown riding down a great serpent-footed monster, which represented a divinity or gigantic power of some unknown significance.” This is, of course, a terrifying image, and an activity in which Taranis surely takes great pleasure. Why does he do this? It is unclear, other than because he can and he wants to scare the shit out of everyone. Worshipers of Taranis, as mentioned, were so fearful of his wrath that they would regularly sacrifice humans and animals to keep his temper in check. All of the major Celt gods desire human sacrifice, but Taranis’ preferred method is particularly gruesome – he wants his humans burned to death, and though this likely happened in a wooden vat in a grove, there is also a story that this would happen by trapping people in a large wicker man and burning it to the ground. So, in other words, the ancient Celts had their own insane version of Burning Man, presumably with fewer hallucinogens (but approximately the same number of pointless fatalities).

Though not incredibly widespread, there is another school of thought that Taranis is actually a benevolent warrior god and that the stories of wrath and human sacrifice are the products of Roman propaganda so dirty it would make Karl Rove blush. And there are plenty of other sources which have other contradictory things to say about Taranis. The truth is, we don’t know for sure everything he was worshiped for, the significance of his wheel, his real status in Celtic mythology, or many other things. Sources differ, new information comes to light which discredits or challenges old, and there is honest disagreement to be had about how exactly the Romans syncretised the religions of the people they captured with their own. Most likely, though, Taranis is a fierce, frightening, and bloodthirsty god of thunder and lightening who is responsible for the destructive weather systems that have been plaguing humankind and keeping us humble throughout all of history.

TARANIS or INHERIT THE EARTH by Trevor Scott Floyd
Directed by Maddie Gaw
Staged Reading on November 8, 2019 at The EXIT Theatre

Trevor Scott Floyd (he/him/his) is ecstatic to be writing for the SF Olympians Festival for the first time. He is the Artistic Producer for Marin Theatre Company, a LORT D theatre in the San Francisco Bay Area. Previously he was MTC’s Artistic Associate, Company Manager, and Director of Ticketing. Originally from the beaches of South Carolina, he graduated from Clemson University with a double major in Theatre and Political Science before trading in the Palmetto trees for the Redwoods.

The image of Taranis was created by Katie Leavens.